How to convert a maximal planar graph to a regular planar multigraph?

Given a maximal planar graph (coming from the convex hull of a set of points on a sphere), I want to add edges until it is regular (all vertices touch the same number of edges), while keeping it planar. Multiple edges between the same pair of points are allowed, but edges starting and ending at the same point are not.

How can I find a set of edges to add which achieves this?

Any algorithm that can achieve this will be useful. Ideally it would also be a way to get there with the smallest number of edge additions, but a simple and reliable algorithm is more important here than being strictly minimal.

for example - here adding the red edges makes it 5-regular 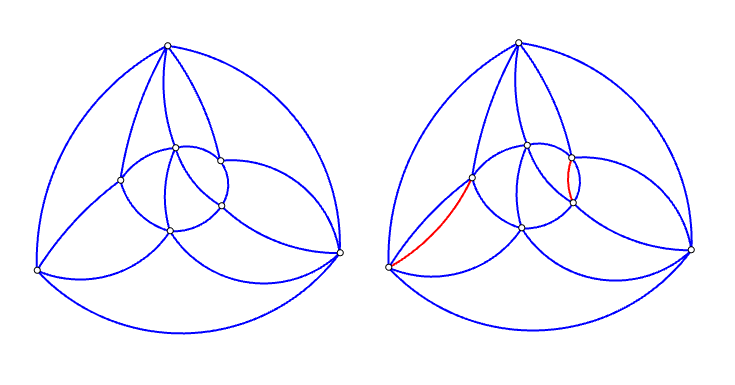 This is a (hopefully more clearly defined) variation of my last question - From a triangulation of a sphere to a 4-regular planar graph in the minimum number of topological changes?

I have two news for you. I’ll start from a good one.

Note that since the original graph $G$ is maximal, regularizing it we can add only copies of edges $G$.

Unfortunately, the second news is that even a Hamiltonian triangulation (with even number of vertices) can be non-regularizable. Its construction is suggested by the following slide from “Hamiltonian Cycles in Triangulations” by Gunnar Brinkmann, Craig Larson, Jasper Souffriau, and Nico Van Cleemput. 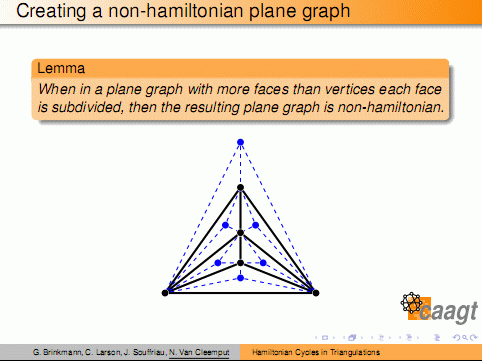 Since a graph $K_4$ has four vertices and four faces, its face subdivision $K_4’$ (see the picture below) is a simple example of a non-regularizable triangulation. It is Hamiltonian but a sequence of degrees of vertices along a Hamiltonian cycle is $\dots, 3,6,3,6,\dots$, so the regularization approach from the first part of the answer clearly fails for this graph. 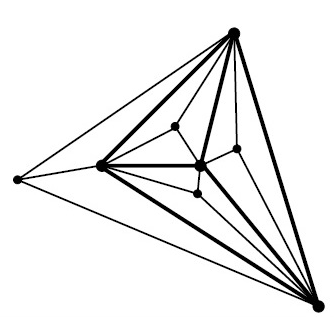 Not the answer you're looking for? Browse other questions tagged graph-theory hamiltonian-path triangulation or ask your own question.

0
From a triangulation of a sphere to a 4-regular planar graph in the minimum number of topological changes?

1
Four color theorem, 3-regular planar graph, Hamiltonian path and spiral chains
1
Corresponding Triangulations of an (n+2)-gon to n Segments Connecting n+1 Collinear Points
8
When is a graph a triangulation of a polygon?
0
Triangulation to maximize the number of triangles, including those with points inside
5
Characterization of platonic graphs
7
Prove that the icosahedron graph is the only maximal planar graph that is regular of degree $5$.