In how many ways can 20 identical balls be distributed into 4 distinct boxes subject to the following conditions.

I tried different methods to work this out mathematically and the only one that proved useful is:

But I don't understand why this works. Can anyone please give a mathematical solution to the problem?

The reasoning behind the this result is described quite well in the linked article, but I’ll repeat here the special case that you need.

Think of laying out the $10$ glued pairs in a row on the table:

They’re completely indistinguishable, so it doesn’t matter which one is which. Now insert three dividers to mark the breaks between the pairs in the first and second boxes, those in the second and third boxes, and those in the third and fourth boxes. For instance, if there are $3$ pairs in the first box, none in the second, $5$ in the third, and $2$ in the fourth, you get this arrangement:

I remember solving a similar problem on a combinatorics test by forming a bijection to the problem of finding the shortest path on an NxM grid. This is a well known problem, basically imagine you have a grid of width N and height M. Now, starting from the bottom left, how many paths are there that only ever move either up or right (that is, they never backtrack, and thus are all "shortest paths"). The answer is (N + M) choose N.

Now we simply have to form said bijection by expressing the problem in terms of this grid. Imagine the Width of the grid represents each box, and the height how many balls are in said box. Now, since each box needs an even number, then each "step up" in the grid represents two balls. So for example, this path: 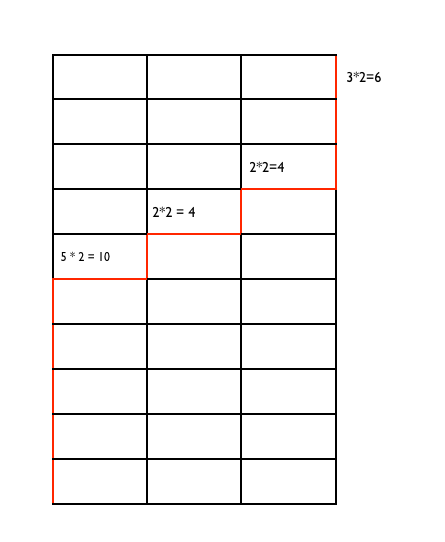 Represents the arrangment: 10 balls in the first box, 2 in the second box, 2 in the third box, and 6 in the fourth. Again, this is because our path starts by moving up 5 rows (and each step up represents 2 balls), then moves up 2 more rows (2 * 2 = 4), 2 again, then 3 additional rows. As you can see, every path we generate necessarily has to represent an arrangment of 20 balls. The trivial path: 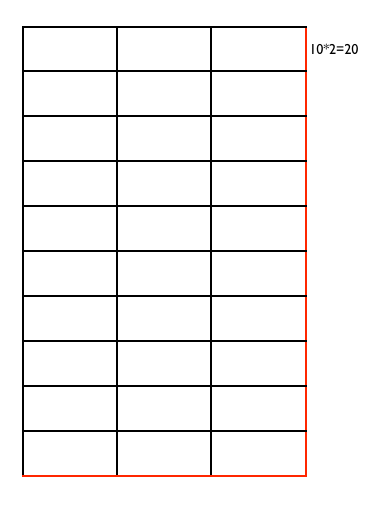