Given a positive real number $R$ and $n$ fixed points in a plane, find the largest possible value $M$ such that if the pairwise distance between the $n$ points is less or equal to $M$, there exists a circle of radius $R$ that contains all $n$ points.

I realize this is related to the smallest enclosing circle problem, but it is not the same. Basically, I have a set of points, and I know all the pairwise distances between them, and I am given a fixed radius. I want to be able to say that if the maximum pairwise distance between these points is less than $M$, then there is definitely a circle of radius $R$ that encloses all of them, where this M is as large as possible.

Obviously, for two points, the answer is $2R$. For three points, it gets more complicated, but using some geometry, I believe the answer is $\sqrt{2}R$ (as in $\sqrt{R^2 + R^2}$), but I haven't been able to prove it. I would like to generalize this to $n$ points, where I am fine with the answer being dependent on $n$.

My hypothesis is that $\sqrt{2}R \leq M \leq 2R$ for all $n$, but I would be mainly interested in how large $M$ can be made as the number of points increases.

Where is the third point $C$? It has to be somewhere in the pink region. The borders of that region are segment $AB$ and two arcs, each encompassing $60^\circ$ with centers at points $A$ and $B$. Wherever you put the third point ($C',C''$), you can always cover the whole triangle with the blue circle. But the blue circle cannot be any smaller because in that case it could not cover the triangle $ABC$. And in that case: 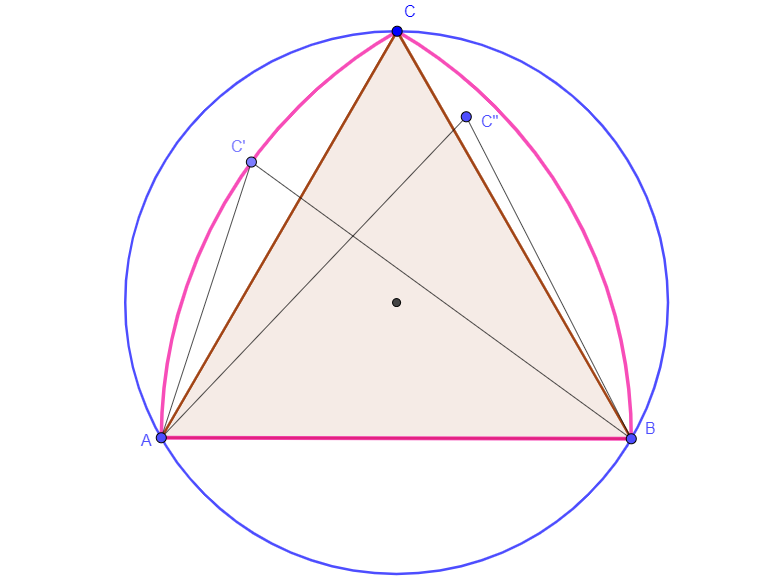 2
Mean distance between N equidistributed points in a circle
3
A Sphere Containing Points of Pairwise Equal Distance
4
Is there any object/metric within all points are at same distance to each other?
2
Circle around three given circles
1
showing that the maximum distance between any pair of points inside a circle
3
Smallest enclosing circle of points with minimum distance 1
0
Expected maximum sum of pairwise distance for *n* points on a cylinder
1
Enclosing Circle for a Set of 'n' points