Exactly one of the three points $L,M,N$ lies on the triangle $ABC$, where $AL, BM, CN$ are proper Cevian lines 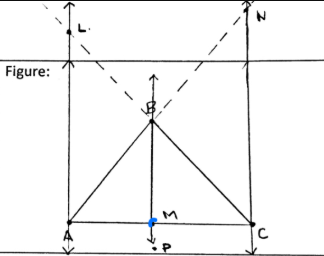 $AL, BM, CN$ are proper Cevian lines and are concurrent at an ideal point.

To prove - Exactly one of the three points $L,M,N$ lies on the triangle $ABC$.

I was thinking that from Ceva's theorem we have, $\frac{BL}{LA} \cdot\frac{BN}{NC}\cdot\frac{BM}{MC} =1$. And $P$ is the only ideal point (I am thinking how?) and it is not in the ratio (which follows from the polarity)

It would help if you stated Ceva's theorem correctly. The correct statement is that $$\frac{BL}{LC}\cdot\frac{CM}{MA}\cdot\frac{AN}{NB} = 1$$ What does one of the points being on the triangle tell us? $\frac{BL}{LC}$ is positive if and only if $L$ is on segment $BC$, and similarly for the other two. In order for the product of all three ratios to be $1$, which is positive, either exactly one or all three of the points must be on the triangle.

Now, if two of the points $L$ and $M$ are on the triangle (sides $BC$ and $CA$ respectively), the lines $AL$ and $MB$ intersect inside the triangle.

Not the answer you're looking for? Browse other questions tagged geometry triangles plane-geometry or ask your own question.