Confusion related to definition of a derivative at a point in its domain of definition.

I have just completed relations and functions and now I am studying limits and differentiability.As a beginner help me to clear my doubts.

My textbook defines limits in this way:-

Now I have basically two confusions whether the algebra of limits is a law or a definition.I can verify the properties of algebra of limits by considering some real valued functions but I am unable to prove it.

My next doubt is related to definition of a derivative of a function at a point in its domain which is stated in my textbook in this way:-

Now I know that as 'h' tends to become 0 then the expression after the limit has some finite limit but I can't perceive it in the notion of limits. I know it's geometric interpretation that this is the slope of the tangent to the curve at point 'a' .

I am very much confused that how I can interpret it in the way I do for limits. Please tell me if I am not able to convey my problem. Please edit it if there is any problem in math Jax. 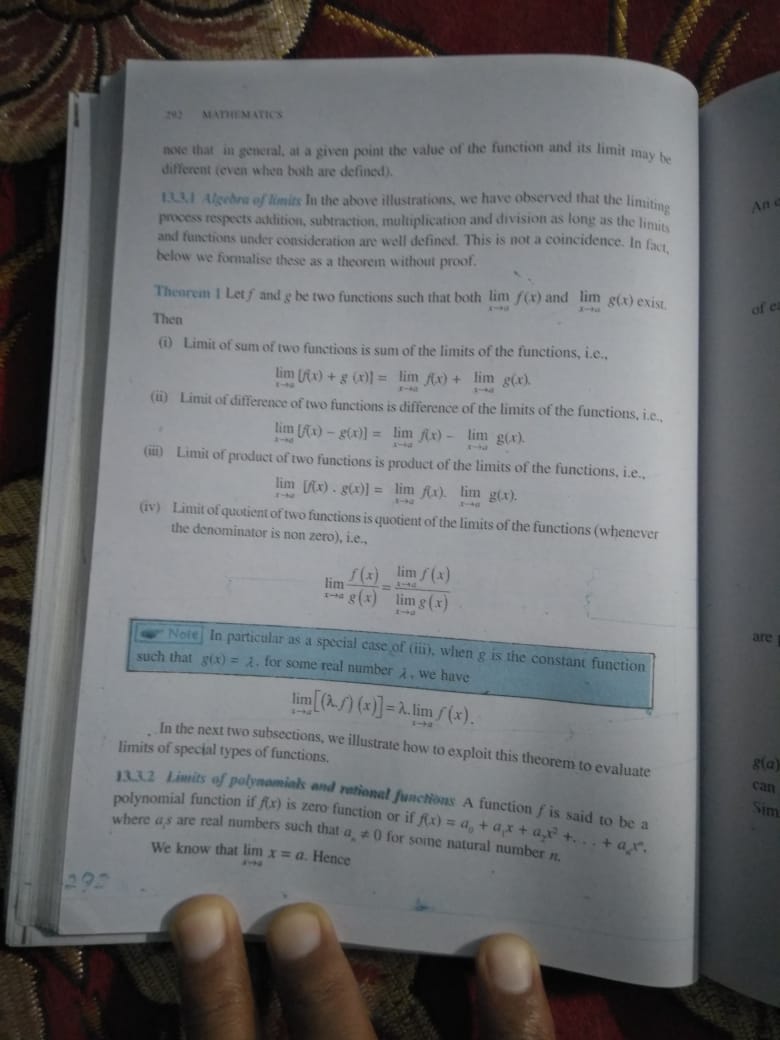 Now the idea of a derivative at a point $x$ is if we assume $f$ is a "nice" at that point (continuous, not jaggy,etc) so that it has a well define tangent line at $x$ the derivative at the point $x$ will be the slope of the tangent line. (If the function, $f$, is "nice" then every, or at least several, different points $x$ will each have their own tangent lines with different slopes.)

So if the function is nice:

And that should answer your question.

Yes the algebra of limits can be proved and you may read it in any standard first year undergraduate calculus book like Apostol.And in second part, it is not necessary that limit may exist, it can diverge , in case it exists , we say it is detivative at that point. Geometrically, notion of limit can be taken as a considering the value to which tangents drawn in neighbourhood points of x tend to converge

The following is the definition of the derivative function provided the limit of the difference quotient as $h\to 0$ exists, if you wish to find the slope at a point say $x=a$ then just put $a$ in for $x$. $$f'(x)\equiv\ \lim_{h\to 0}\underbrace{\dfrac{f(x+h)-f(x)}{h}}_{\text{difference quotient}}$$

Now coming to the laws of limits yes they can be proved, these proofs make use of the formal $\epsilon -\delta$ definition of the limit. This link: Proof of various Limit laws contains what you're looking for.

3
Definition of derivative
5
Is continuity at a point only defined for points in the domain?
0
Derivative of a point equal to its output in a function that's continuous in a domain.
0
How to find the limit of $1+\ln\left(\frac{1}{x}\right)$?
2
Limit of a function at a point in the domain of the function and/or the closure of the domain.
0
Definition of derivative - is it approaching value or actual value?
0
Limits and continuity at endpoint(s) of domain
0
Is a function differentiable at the end point of its domain?