What is the Difference Between Formulating the Answer via Quadratic Formula and Factoring?

Take this for a problem (I didn't make it myself) 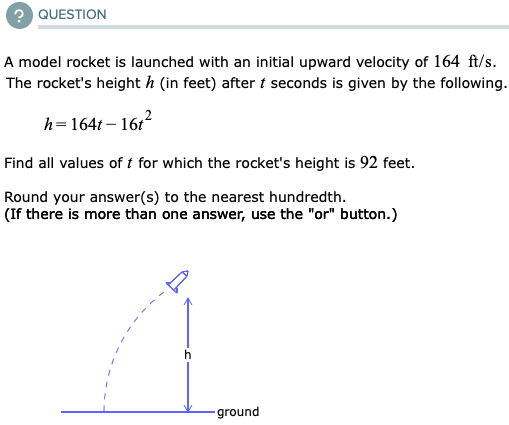 I know that the quadratic formula is required to solve the answer, but why not factor?

I previously asked this on Math Overflow, but this is the right place.

Which is appropriate to use when is simply a matter of one's computational speed.

Factoring, for instance, is something we often think about only being doable when we have rational or integer coefficients, and generally smaller ones. For the most part, that's true - if you don't want to spend a painstaking amount of work, you want to focus on those cases. For instance, consider your equation:

To properly factor this, you need to figure out which factors of $92\cdot -16=-1472$ have a sum of $164$. You could sit there all day enumerating the various factors and checking the sum, or you can just go "screw this" and decide to just plug-and-chug using the quadratic formula, and probably solve it faster. Really, try it - see which one you solve faster!

(Anecdote: when you see a "round to the nearest hundredth" tenet in a question, a lot of the time that means the question will have not-so-nice roots, i.e. they'll be irrational probably. Which touches on another issue: if the square root in the quadratic formula is not a perfect square, then you definitely cannot factor it just by using integers, you might have to reach for square root factors instead ... which makes this even more of a mess and is why factoring isn't always optimal. Let's nail that point home...)

Okay, so forget the big numbers and such - let's say you're great at factorizing even large numbers. But then there's a problem: factoring doesn't necessitate integers/rationals. They are easier to work with like that, but consider:

At a glance, how would you even factor that latter expression, without knowing what led up to it? Or perhaps another, nastier, crueler one:

At least if they're "nice enough" you can guess perhaps a means to factorize it, but I see no obvious way for the above polynomial. How would you even begin to approach this a priori?

I'd rather sit there and just plug-and-chug, than try to guess how to factor some weird expression. Simpler to do and process.

That's not to say either method is "invalid" in either situation. Factoring takes advantage of the fact that, if a polynomial of degree $n$ has roots $r_1,r_2,...,r_n$, then it can be written in the form

where $a$ is its leading coefficient. And it so happens that for integers and similar-enough polynomials, factoring can be relatively easy. But that's simply not always the case, which is why it's nice that the quadratic formula provides a quick, general solution just in case the expressions aren't nice enough - which is something we can't say for all polynomials!

In short - use whichever method you choose, both are valid. But always be cognizant of the time it takes for you to get the solution any one way, as opposed to another way. No sense in wasting time and energy when the end result is the same.

First of all, in the context of a mechanics problem like the one where this equation originates, often you'll only want an approximate decimal solution in the first place. That said, henceforth let's assume we really want an exact answer and that the coefficients of the quadratic equation are integers, or even rational numbers.

One can always in principle use either method, but the roots of $$a x^2 + b x + c = 0$$ often contain radical expressions, so it's often not easy to factor these. By inspecting the quadratic formula we can actually say when this will happen: The solutions of the equation will involve radicals (and factoring is, roughly speaking, hard) except when the quantity $$\boxed{\Delta := b^2 - 4 a c}$$ is a perfect square.

Remark The quantity $\Delta$ is called the discriminant of the quadratic polynomial, and it gives us a good deal of information about it. For example, if it is negative, then the radical expression in the quadratic formula is an imaginary expression, and so the quadratic equation has no real roots at all.

In fact there is no "by factoring" resolution method.

An alternative approach known as "completing the square", with the step

is indeed a resolution method. But looking closely, it is just a way to re-establish the quadratic formula.

A second alternative is to use the Vieta relations,

and solve for $r$ and $s$. There can be an obvious solution, and you are just in the case of factorization "at a glance". The second equation leads you to the "rational root theorem", which can be used when the coefficients are integers (factor $a$ and $c$ and try the ratios of the factors).

In the general case, analytical resolution of this system brings you back to… the quadratic formula.

As regards the way to present the answer, writing

Not the answer you're looking for? Browse other questions tagged algebra-precalculus quadratics factoring or ask your own question.

1
Equation of an Inverse of a function