What is the tangent at a sharp point on a curve?

How to know which line represents tangent to a curve $y=f(x)$ (in RED) ?From the diagram , I cannot decide which line to take as tangent , all seem to touch at a single point. 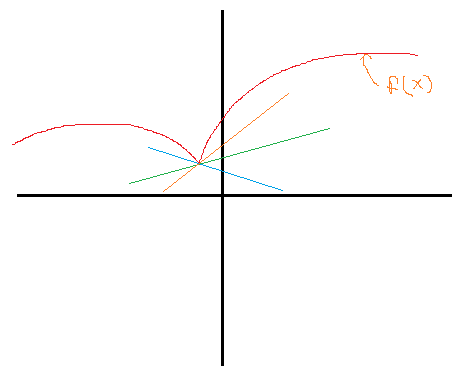 None of them, because it's not differentiable there, so there is no tangent line at that point.

One of the defining points (no pun!) of a tangent is the idea that as you look at a smaller and smaller section of the curve, the curve starts to more and more looks like a straight line.

That behaviour lets you do a huge number of things:

Not all curves behave like that, and yours doesn't. No matter how close you inspect the cusp of your curve (the pointy bit), it's never going to resemble anything like a straight line, on any scale. It'll always look like a cusp.

That isn't in fact unusual. In fact more curves don't have a gradient than do - its just that we don't study curves at random, so you mainly look at curves that do - at least, at this level of maths!

If the cuspid you draw is actually a cuspid (roughly speaking: if microscopically it is not "rounded") you can speak of a right and left tangent, same as you do with limits.

Refer to this wiki article.

Also note that, if the semi-derivative on one side has the value of $m$ and the other $-\,m$, then the two lines geometrically coincide into a single line (or, maybe better, half line or ray).

The "classical" tangent does not exist indeed. However for a convex function with a sharp point, you can use a generalization of the derivative called the subderivative. It is used frequently in optimization.

If $y=F(x)$ is not differentiable then the differential coefficient /derivative does not exist and there will be no unique tangent defined.

Ignore the following if it makes no sense now. There are situations when if a third space variable $z$ like in $(x,y,z) $ is defined involving a fourth common parameter $t$ like it is for this four branched curve between four sharp cusps:

At $ x-z$ or $ y-z$ projections ( a shadow, if you will) exist tangents that suddenly rotate by $90^{\circ}$ at cusp points and tangent slope includes all slopes in between.. in a situation where there is differentiability at these critical points.

Since we're doing geometry, let's think kinematically, too. Imagine a point moving along your curve, in the direction of increasing $x.$ Furthermore, let a ray project from the point, tangent to the curve there (you might think of your curve as a lane, and the point a car in the night; imagine the headlights beaming straight ahead as the tangent ray at any location on the curve).

Then as you approach the cuspoid from the left, the ray points down; at that point therefore, we can say it points down from the left. Now, let the point turn without leaving the point; then the tangent ray points up to the right -- at the same point! That happens nowhere else on the curve. Thus, we have two possible candidates for the tangent using this definition of tangent. If we require the tangent at a point to be unique, then there is no way to pick one of the two at the cuspoid without making further assumptions (which will be more or less arbitrary). The same thing happens for a point approaching the offending point from the right along the curve.

Thus, the curve has no unique tangent at that point. The reason is that you can think of the two branches of the curve as separate curves intersecting at a nonzero angle at that point. Suppose, for example, that we have two semicircular arcs instead, of the same radius and touching externally. For more clarity, take the positive parts of $(x+1)^2+y^2=1$ and $(x-1)^2+y^2=1.$ Then if we do not consider out tangents as directed, we can have a unique tangent at the origin in this case, since the two arcs are parallel at that place. However, if we think in terms of functions, there is still no derivative at that point, since the derivative measures the slope of the tangent line wrt increasing $x.$ However, if you imagine our point moving along this curve from left to right and crossing the origin, then the tangent ray points in opposite directions immediately before and after the point. Thus, there is no derivative there. However, purely geometrically, it is possible to speak of a tangent in this case.

I hope I have contributed to your understanding.

There are two possible definitions of "tangent" at a point $\vec{p}$ in terms of the equation $f(\vec{v})=0$ of the curve as follows.

Definition 1 : A tangent line is a line which meets with multiplicity at least 2.

This is the most common definition. With this definition, there are infinitely many tangents at the point in your figure.

Definition 2 : A tangent line is a line which meets with the maximal multiplicity.

With this definition, there is a single such line in your example. However, we can easily make a figure with two or more cusps joined together and thus create an example with more than one tangent under this sense of tangent.

To avoid confusion, the second kind of tangent is usually not called a tangent but an "infinitely near point" in algebraic geometry. (However, this notion makes sense for more general situations than the case where $f$ is a algebraic.)

48
Problem with basic definition of a tangent line.