How can I prove Euler's formula using mathematical induction

I can simply do induction on the edges where the base case is a single edge and the result will be 2 vertices. A single edge also has only one region which is the external region.

Which is true if I drew a connected graph of that has a single edge there are two vertices. However, the inductive step where I am supposed to prove that there are $e + 1$ edges I am confused on how to prove this. I can simply add another edge and the formula will still stand true but I don't think that's the correct way to do it. For example, I don't think my professor would accept this on the exam if I tried doing the inductive step like this:

if we let $e=1$ again then there would be

which is true, a connected graph of two edges has 3 vertices at most. However, i do not think this is the correct way to prove Euler's formula during the inductive step.

Now suppose the formula holds for all graphs with no more than $e - 1$ edges. Let $G$ be a graph with $e$ edges. Consider two cases. Case 1: G does not contain a cycle. Then G is a tree, for example 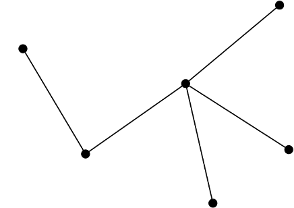 Not the answer you're looking for? Browse other questions tagged induction planar-graphs platonic-solids or ask your own question.