If I randomly draw parameters for a polynomial of degree $n$, say $P_n$, there seems to be big chances that this polynomial can be closely approximated by a polynomial of smaller degree $P_{n-k}, k\in\{1,\dots,n\}$. 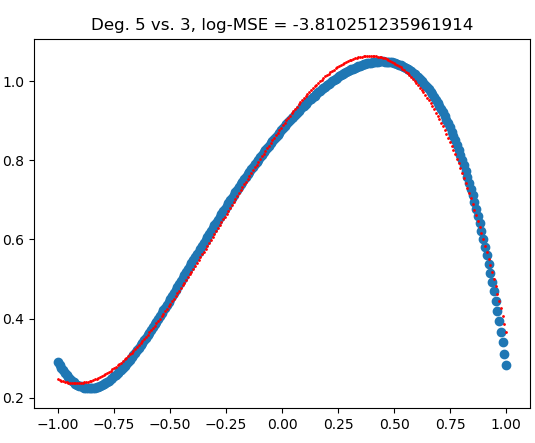 I am interested in random polynomials $P_n$ that are "complete" in the sense that they are not easily approximated by lower-degree polynomials. 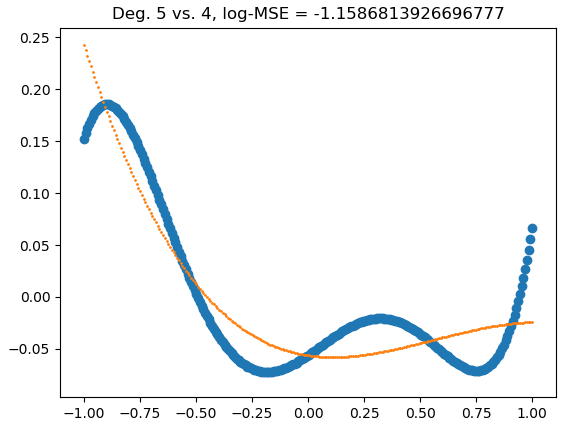 How do I randomly draw from this class of polynomials only?

Attempt to formalize the problem, and generalize to multivariate polynomials in $d$ dimensions:

Let $t \in \mathbb{R}^{+*}$ be a minimal dissimilarity threshold. A multivariate polynomial of degree $n$ is considered on the hypercube $P_n: [-1,1]^d \to \mathbb{R}$. Its coefficients $a$ can be refered to by $d$ indexes so that $P_n(x)$ can be expressed as the sum of each monom

For each polynomial $P_n$, its "completeness" is measured by the smallest dissimilarity between itself and another $Q_{n-1}$ polynomial:

Bonus: if I could also relax the $A$ restriction but ensure that

the satisfaction would be complete.

Not the answer you're looking for? Browse other questions tagged polynomials approximation random multivariate-polynomial or ask your own question.

5
Hermite Interpolation of $e^x$. Strange behaviour when increasing the number of derivatives at interpolating points.
6
Polynomials with $S_n \times \mathbb{Z}_2$ symmetry
3
Approximate roots of Jacobi Polynomials
1
Can we prove that all roots of those polynomials are real negative?
1
What's the degree of a multivariate polynomial in Artin Algebra?
2
Special polynomials and an identity of hypergeometric series
8
An Unusual “Polynomial Identity”
0
Multivariate Polynomials of Max-degree 1