For any eight points on an equilateral triangle of side $1$, there's at least one pair of those points at most $1/3$ apart

Let's say we have an equilateral triangle of side length $1$. Show that for any configuration of eight points on this triangle (on the sides or in the interior), there is at least one pair of from these eight points such that the distance between the two points in the pair is less than or equal to $1/3$ cm.

My idea was to draw out the triangle and put three points on each edge, such that each point lies on the trisection of a side, but I'm not quite sure if this is rigorous enough.

Also, as an extension question, can we say anything for the more generalized version of this problem with an equilateral triangle of side length $n$ and $m$ points being chosen?

It turns out that it is possible to place eight points in an equilateral triangle of side $1$ so that the minimum distance is greater than $\frac13$. The diagram below shows how the points can be arranged. 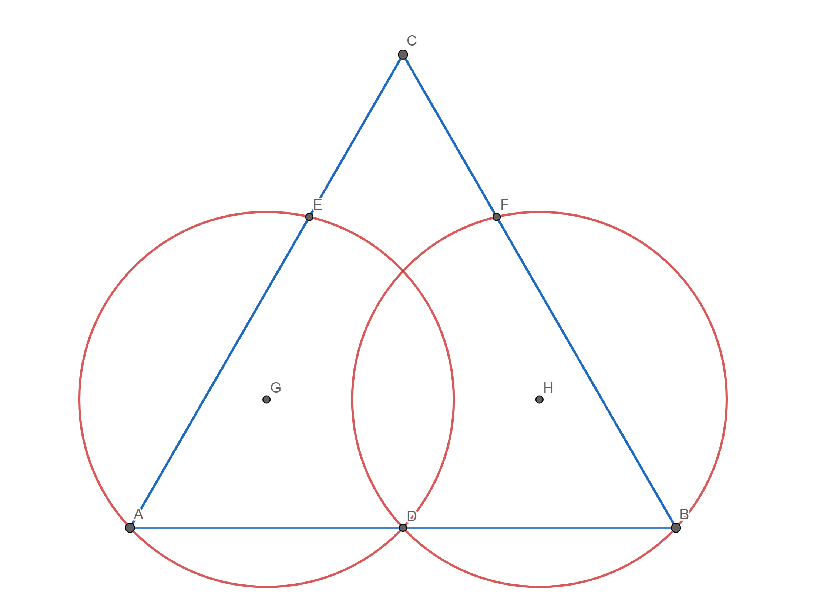 Points $G$ and $H$ are the circumcenters of triangles $ADE$ and $BDF$, respectively. The value of $d$ will be chosen so that the circumradius of each circle is also $d$, which will then be the minimum distance between any pair of the eight points.

(I first found a different arrangement that worked, although with a smaller minimum distance. It then occurred to me to checking the best-known packings of circles into an equilateral triangle at Erich Friedman's Packing Center. The packing for eight circles, when adapted to points, was both better and easier to explain than the one I had found earlier.)

Not the answer you're looking for? Browse other questions tagged geometry pigeonhole-principle or ask your own question.

6
Maximum distance between points in a triangle