two points of the longest distance in a convex curve will be the vertices?

We have Four Vertex Theorem: Every convex simple closed curve in $\mathbb{R}^2$ has at least four vertices.

Obviously, it's true for the elipse.

No. In fact a curve in general position does not satisfy this property.

To construct a concrete counterexample, take an ellipse, nearly round one and take its Minkowski sum with a long segment, which does not go in the direction of its axis.

The curve which bounds the obtained convex set does not satisfy your property. Smoothen it if you want a $C^\infty$-curve.

For people who don't visualize Minkowski sums easily, here is a slight modification of the example given by Anton Petrunin. I erased the middle part of an ellipse (original ellipse still shown below in grey), shifted the left part down a bit, and completed the curve with straight lines. 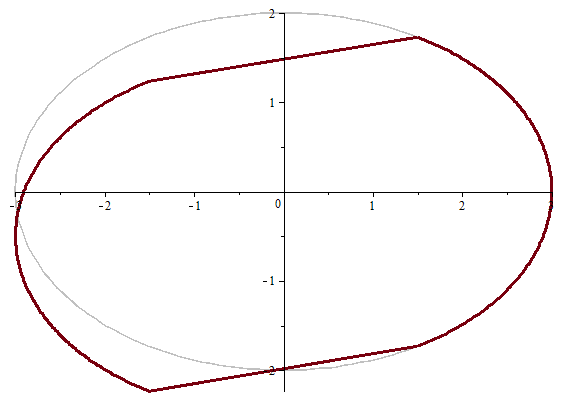 The idea is that because of the shift, the diameter of the curve is attained by a pair of points that are close to, but do not coincide with the vertices of the original ellipse. Hence, the curvature is not stationary there. 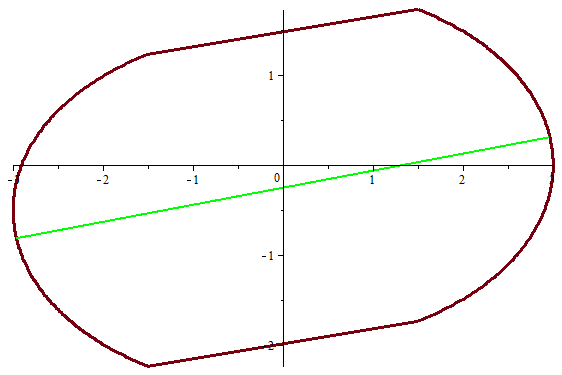 The corners can be smoothened without affecting anything in the construction, since they are far from attaining the diameter of the curve.

0
Curvature of the boundary curve of convex set
8
Distance between two points on the Clifford torus
1
Convexity criterion for piecewise regular planar curves
5
Calculating the curvature of product manifold $\mathbb{S}^2 \times \mathbb{R}$
2
Two equivalent definitions of convex plane curves
0
About the definition of vertex
8
If all circles have constant geodesic curvature, does the surface have constant curvature?