Including rotational motion into a reaction-diffusion model

The reference below describes a system of hypothetical sub-particle units or etherons, diffusing from a region of high to low concentration using Fick’s law of diffusion. How would one introduce rotation or convection into this system?

Besides reactively transforming from one type into another, etherons also move in space. Like molecules in a gas or liquid, etherons exist in a state of random motion continually colliding with one another. Due to their “Brownian motion,” they have a tendency to diffuse from regions of high to low concentration. Just as with molecules, at a given point in space the direction and rate of diffusion of etherons of a given type depends on the direction and steepness of the slope in the prevailing concentration of those etherons. The steeper the concentration gradient, the more rapidly etherons will diffuse down the gradient. This is an example of the Second Law of Thermodynamics at work in nature. Etheron diffusion behavior may be mathematically represented as follows. Let the vector $\boldsymbol{\nabla} C_i (r)$ represent the gradient of the concentration $C_i$ of specie i at a given point in space, that is, the change in its concentration as a function of distance r. The rate of flow of etherons through a unit of surface area disposed perpendicular to this concentration gradient is denoted as the diffusive flux vector, $\boldsymbol{\Phi}_i (r)$. Adopting Fick’s law for molecular diffusion, we postulate that the magnitude of $\boldsymbol{\Phi}_i (r)$ varies in direct proportion to the concentration gradient as:

where $D_i$ is a constant of proportionality called the diffusion coefficient. To calculate the etheron flux in a relative frame of reference in which the ether has a net velocity, $\boldsymbol{v}$, the convective flux vector, $\boldsymbol{v} C_i (r)$, must also be taken into account, giving a total flux of:

Depending on the direction of $C_i$ relative to $\boldsymbol{v}$, these two effects could be either complementary or competitive.

$\boldsymbol{J}_i (r)$ is the total diffusive flux vector, of which the dimension is amount of etherons of type i per unit area per unit time, so it is expressed in such units as $mol \ m^{-2} s^{-1}$.

$D_i$ is the diffusion coefficient or diffusivity for etheron type i. Its dimension is area per unit time, so typical units for expressing it would be $m^2 s^{-1}$.

$C_i(r)$ (for ideal mixtures) is the concentration of etheron type i, of which the dimension is amount of etherons per unit volume. It might be expressed in units of $mol \ m^{-3}$.

$r$ is position, the dimension of which is length. It might thus be expressed in the unit $m$.

Earlier (Section 2.1), we noted that etherons are conserved. That is, any change in the number of type-i etherons must be accounted for either by the import or export of type-i etherons from that volume or by the birth or death of type-i etherons through reactive transformation. To mathematically represent this accounting process we must first define a scalar quantity called the net diffusive flux $S_i$ which represents the rate at which type-i etherons flow into or out of a given incremental volume through the surface bounding that volume. This rate is expressed as the divergence of the etheron flux vector, $\boldsymbol{\Phi}_i$ :

For a relative reference frame, the above relation should be expanded to include the divergence of the convective flux:

However, for many of the situations we will be considering, we may assume $\boldsymbol{v} = 0$ and neglect this second term. The etheron conservation requirement may now be mathematically expressed as:

The obvious answer is that it is prohibited by the vector relation that the curl of a gradient field is zero $$\nabla \times (\nabla \phi )=\mathbf {0} $$ which means that the reaction diffusion equations, which only include gradient differential operators in the spatial domain, can never change angular momentum.

Maybe it is possible anyway. I think the apparent similarity between some circular motion with some straight motion might be of help. See the following animation. Red particles at left are moving on straight paths. Green particles at right are on curved paths: 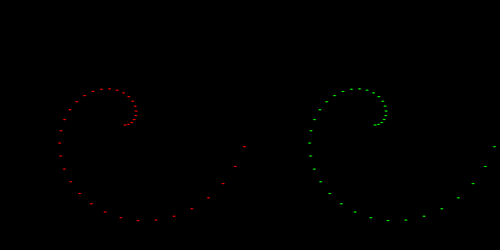 So maybe similar effects to torque can be had in some scale intervals. It also requires the substance in the straight motion to have divergence since it appears in the middle and disappears at the edge, which it can with its reactions.

This kind of spiral waves can exist in an inner part of the Belousov-Zhabotinsky reaction-diffusion process.

If the rotational rate of a fluid particle is,

The velocity component $\boldsymbol{v}_\omega$ of the angular velocity $\boldsymbol{\omega}$ can be added to the total diffusive flux vector $\boldsymbol{J}_i(r)$, to account for the rotational motion:

Not the answer you're looking for? Browse other questions tagged vector-analysis physics brownian-motion rotations fluid-dynamics or ask your own question.

3
How can I convert a Brusselator type model of reaction-diffusion to include vortical motion?

8
Cauchy Momentum Equation - Stress Tensor
2
Gradient in geometric calculus
2
How can we describe the diffusion of "things" injected into a fluid?
1
Are unit conversions unnecessary when constructing this differential equation?
0
Rotational diffusion in Brownian motion
3
How can I convert a Brusselator type model of reaction-diffusion to include vortical motion?
2
Flow and flow rate... Halp!