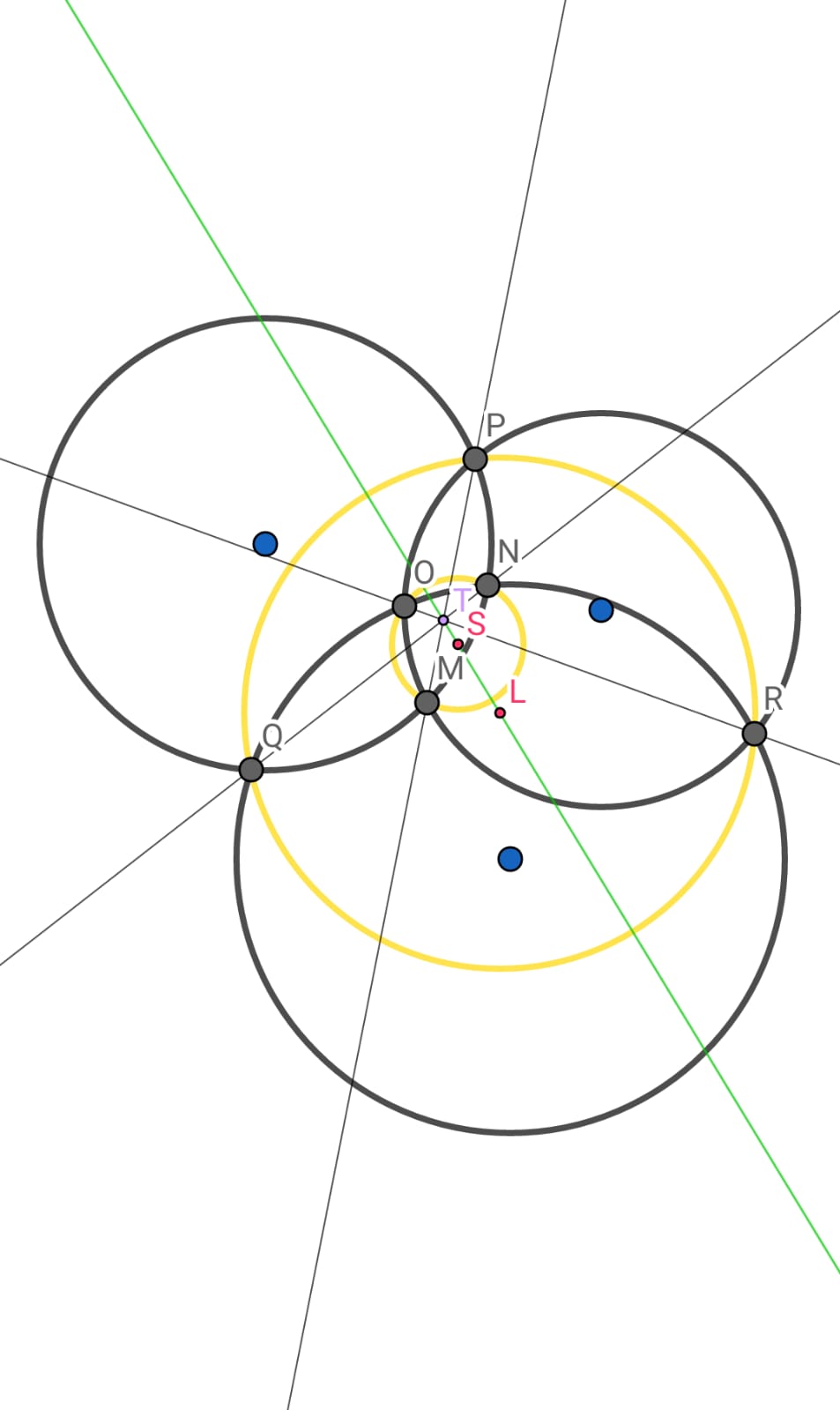 While messing around with the radical center of three circles, I found out the following thing:

Given three circles intersecting in the points $M,N,O,P,Q,R$ as in the picture, the line joining the circumcenters of the triangles $\Delta MNO$, $\Delta PQR$ passes through the radical center of the three circles.

Why is this true? I tried using power of a point wrt the two circles to show that the radical center lies on the line, but to no avail. Any ideas?

Consider inversion transform $I$ having $T$ as its center, and $p$ as its power.

In such a case the center of inversion is aligned with the circle's centers. QED.

1) In fact, I isn't a "true" inversion, but as Coxeter and Greitzer define it, an anti-inversion, i.e., a composition $I= S \circ I'$, of a genuine inversion $I'$ (with same center $T$, opposite power $-p>0$) and a central symmetry $S$. (see p. 192 of their masterpiece "Geometry Revisited" http://www.aproged.pt/biblioteca/geometryrevisited_coxetergreitzer.pdf). No change in our reasoning because alignment is preserved by $S$.

2) "as circles are sent onto circles" : one could object that a circle could be exchanged with a straight line, but this happens only in the case where the circles pass through the origin, which is not the case here because of assumption $p<0$.

3) I have devoted a question to inversion (Ill-known/original/interesting investigations on/applications of inversion (the geometric transform)) some time ago. A certain number of properties of this transformation can be found there.

Not the answer you're looking for? Browse other questions tagged euclidean-geometry geometric-transformation or ask your own question.

5
Similarity involving Miquel's Theorem
0
An Euclidean geometry question with circles.
3
A $10$-point conic through midpoints and intersections of a quadrilateral's sides and diagonals, and the point of concurrence of three related circles
0
Prove that any $d$ ($d - 1$)-spheres in $\Bbb{R}^d$ that intersect at three or more points have centers lying on a ($d - 2$)-plane
3
Congruent triangles in 3 tangent circle configuration
0
In Johnson circles, three lines each passing through the center of one of the circles and the $2$-wise intersection are concurrent.
5
To show the center of homothety of the biggest and smallest circle lies in the common tangent over T
5
How to prove the concurrence of three lines?
1
Radical axes through a fixed point