What is a directed acyclic graph (DAG)?

I am reading this link on Wikipedia; it states the following definition is given for a DAG.

Definition: A DAG is a finite, directed graph with no directed cycles. 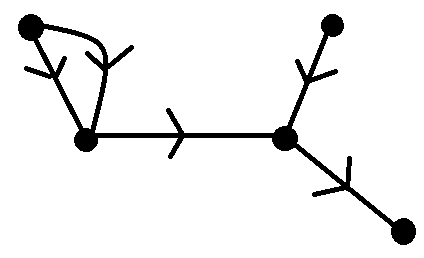 However, all the pictures on Wikipedia show examples of DAGs with arrows pointing the same way. So, I think I am interpreting this definition wrong. In particular, why does the definition mention later on an equivalent definition is that it must have topological ordering such that "every edge is directed from earlier to later in the sequence"? Reading the definition above would lead me to believe that the graph above is a DAG, but then the equivalent definition would make me think otherwise.

The graph you show is a DAG.

It is conventional to draw DAGs with all the arrows going in the roughly the same direction, because that usually gives a clearer intuition about what is going on in the graph.

But remember that locations and directions are not part of the formal definition of a graph -- they're just incidental features of the particular drawing at the graph you're looking at, and it would be the same graph if you drew the vertices in different locations on the paper.

(Even in your drawing, all the edges go in a broadly southeasterly direction -- or at least more southeast than northwest -- so you're actually following the convention).

In particular, why does the definition mention later on an equivalent definition is that it must have topological ordering such that "every edge is directed from earlier to later in the sequence"?

the given graph is indeed a DAG,

Both answers so far state that what you drew is a DAG. However, it is not a DAG by one definition in common use, because it has multiple edges between the two leftmost vertices. It is common to define a directed graph to be a pair $(V,E)$ where $V$ is a set, called the vertices, and $E \subseteq V \times V$ is a set, called the edges (excluding $(v,v)$ for all $v \in V$). A DAG is then a particular kind of directed graph (having no directed cycles). In particular, since $E$ is a set, there is no way to express the fact that there are two edges with the same starting and ending vertices (that would require a multiset). Therefore I would call what you drew a "directed acyclic multigraph". However, the reasoning for why how you draw it does not affect whether it is a DAG, as explained in Henning Makholm's answer, seems to have answered the question that you actually wanted to ask.

You can define things many ways as the Directed acyclic graph at: https://en.m.wikipedia.org/wiki/Magma_(algebra) under types of magma shows. You can define a graph multiple ways, Therefore, any type of graph has multiple definitions. Your drawing is a DAG under a definition of: a graph, whose vertices lack a cycle graph, when following the directed path ordered by direction.

Not the answer you're looking for? Browse other questions tagged graph-theory definition directed-graphs or ask your own question.

1
Is having no directed cycles in a directed acyclic graph (DAG) a byproduct of the design, or is it intentional?
1
A directed graph is acyclic iff the weight matrix of the graph is nilpotent.
3
What is the actual definition of a “Directed Cycle ” in graph theory?
0
Treat Directed Graph as Undirected Graph?
1
When does a weakly connected directed acyclic graph have a unique transitive reduction?
0
What is an Arborescence (Graph Theory)?
2
Confusion about the definition of an acyclic graph
2
Given DAG find smallest DT