Given a compass + straightedge, construct convex quadrilateral tangent to circumcircle

I have no clue on how to start, because I can't find a point such that these conditions are true. I guess $X$ has to be really near one side?

When you can't figure out how something like this will happen, it often pays to invert the logic. What if we start with the tangent circles, and see what quadrilaterals we can get that way? 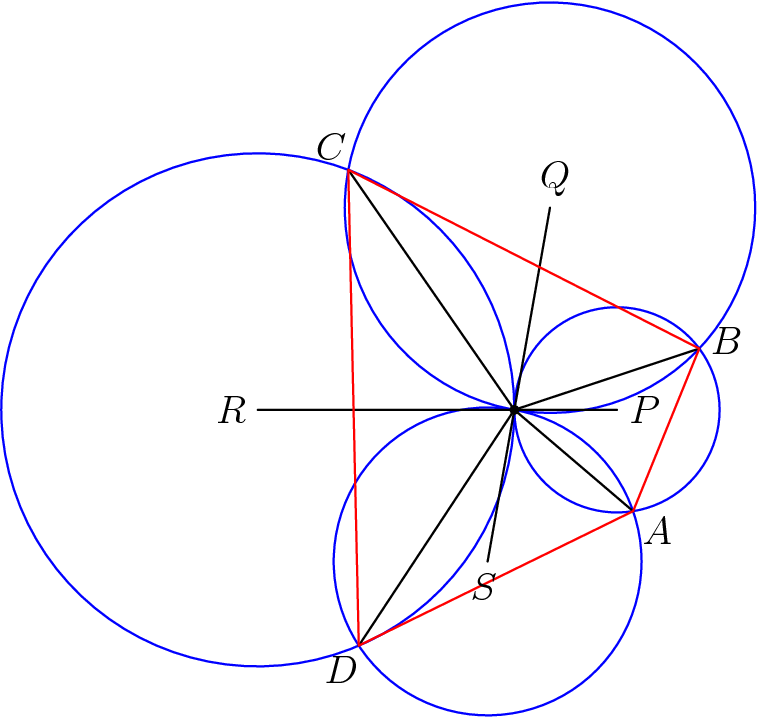 In addition to the circles, I've drawn in the centers $P,Q,R,S$. The two pairs of tangent circles give us that $X$ lies on the line segments $PR$ and $QS$. $X$ is unlabeled in the figure due to too much clutter, but it's the point in the middle where all those circles and lines intersect.

Now, we start chasing angles. From isosceles triangle $XSA$ and the circle $S$ is the center of, $\angle AXS=90^\circ-\frac12\angle XSA=90^\circ-\angle XDA$. Similarly, $\angle QXB=90^\circ-\angle BCX$. From the straight line due $QXS$, $\angle BXA=180^\circ-\angle QXB-\angle AXS=\angle XDA+\angle BCX$. Similarly, using triangles $CRX$ and $XPB$, $\angle CXB=\angle CDX+\angle XAB$. Add the two equations: $$\angle CXA=\angle CXB+\angle BXA=\angle XDA+\angle BCX+\angle CDX+\angle XAB=\angle CDA+\angle BCX+\angle XAB$$ Consider the quadrilateral $CXAB$. The sum of its angles is $360^\circ$, so if we add $\angle CXA+\angle ABC$ to both sides of the equation, we get $$2\angle CXA+\angle ABC=\angle CDA+360^\circ$$ $$\angle CXA=180^\circ+\frac{\angle CDA-\angle ABC}{2}$$ That is the key to our construction - we have found an angle through $X$ in terms of angles of the original quadrilateral. The locus of all points that make that particular angle is a circular arc between $A$ and $C$. If we construct that circle, and the corresponding circular arc for $\angle DXB=180^\circ+\frac{\angle DAB-\angle BCD}{2}$, the intersection will be the $X$ we seek. 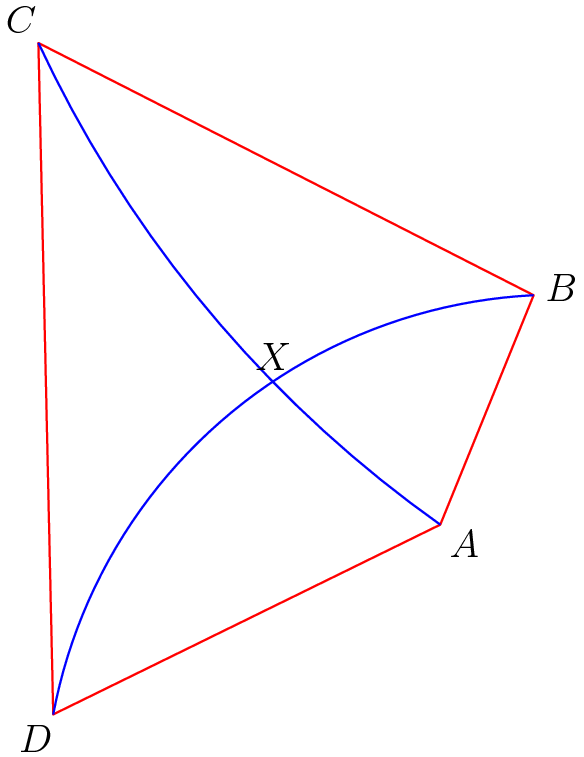 I won't write out the explicit construction for those arcs here, but it's routine in theory. Note that the "inside" of the arc is toward the larger of the two angles, and it becomes a line segment in the case of equal angles.