Let me share a kind of visualization of group tables which is especially well suited for cyclic groups like $\mathbb{Z}$ and $\mathbb{Z}/n\mathbb{Z}$. In these groups you can easily give colors to each group member $k$ with

Which specific number- or group- or ring-theoretic facts can be learned from looking at these group tables?

It comes as no surprise that all addition group tables for $\mathbb{Z}/n\mathbb{Z}$ look essentially the same, independent of the nature of $n$ (be it prime or whatsoever): 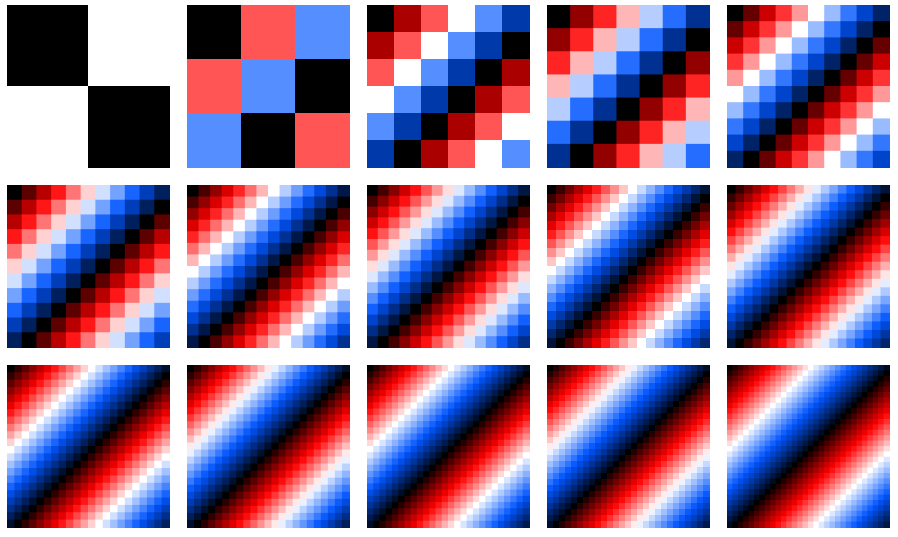 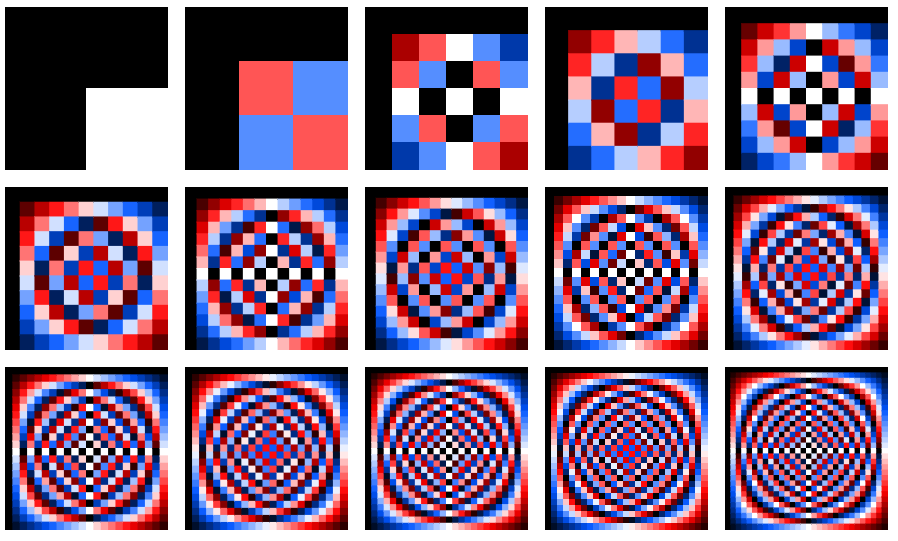 A closer look at consecutive $n$ reveals another detail: the black/white and the red/blue patterns at the center flip every second step: 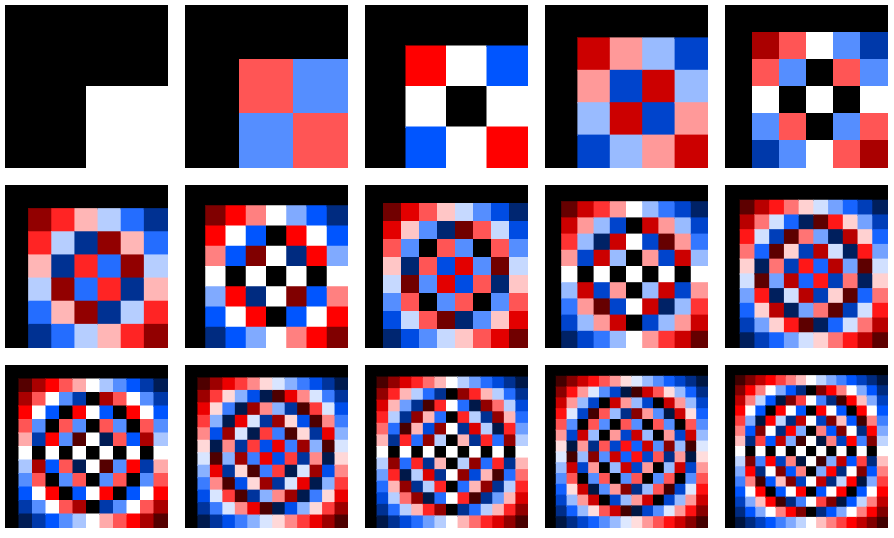 As you may guess there is not a unique limit pattern, but only a kind of pattern whose details depend on $n$ (mainly its size), especially the distinctness and size of "subcenters" (next to the "main center" at $(\frac{n}{2},\frac{n}{2})$), e.g. of the four subcenters in the cases above which you may immediately see (near the centers of the four quadrants).

Here is the multiplication group table for $n=512$: 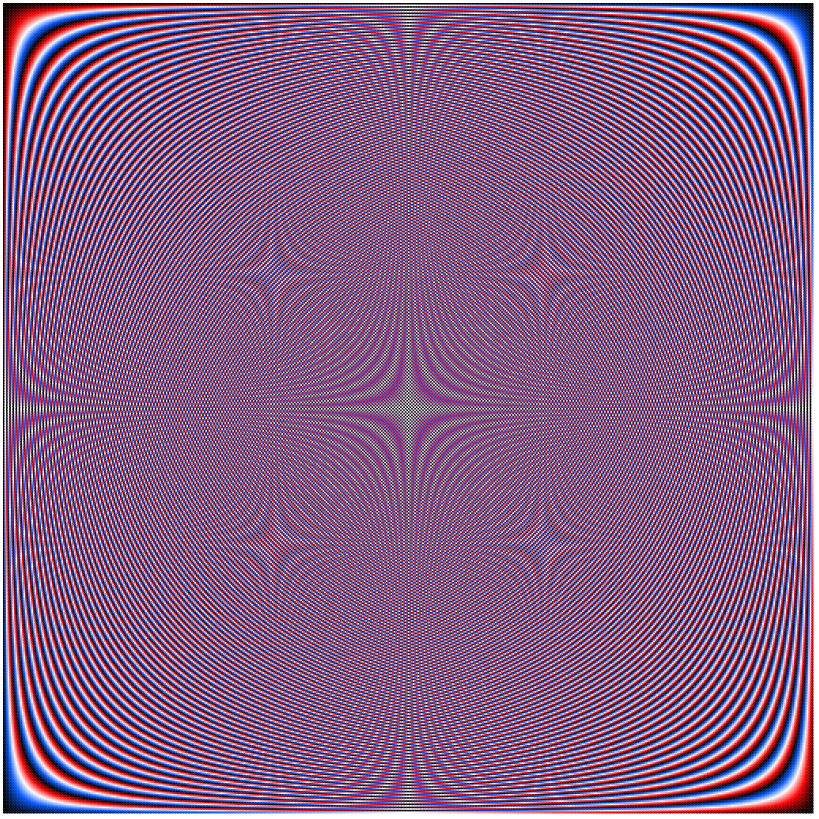 To repeat my question:

Which specific number- or group- or ring-theoretic facts can be learned from looking at these group tables?

To ask one specific question:

For another sake of comparion: See here some group tables with red = blue: 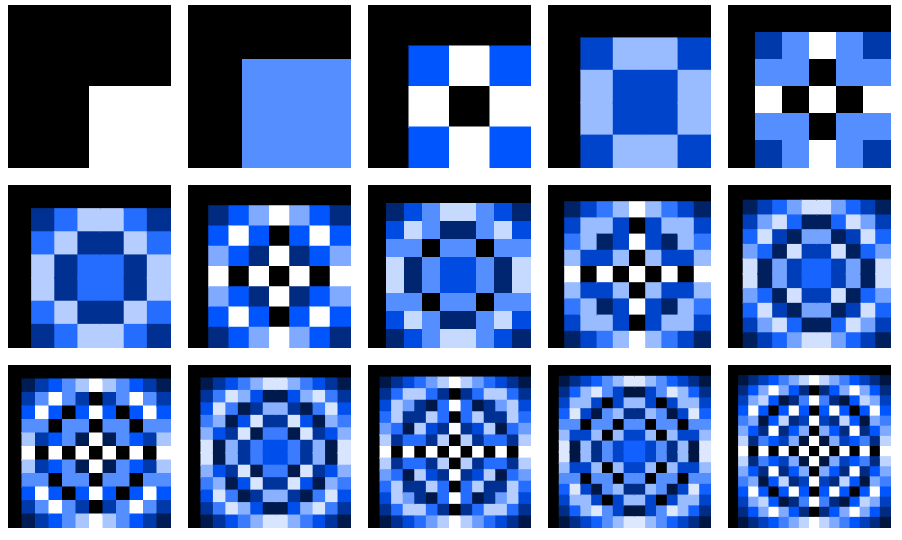 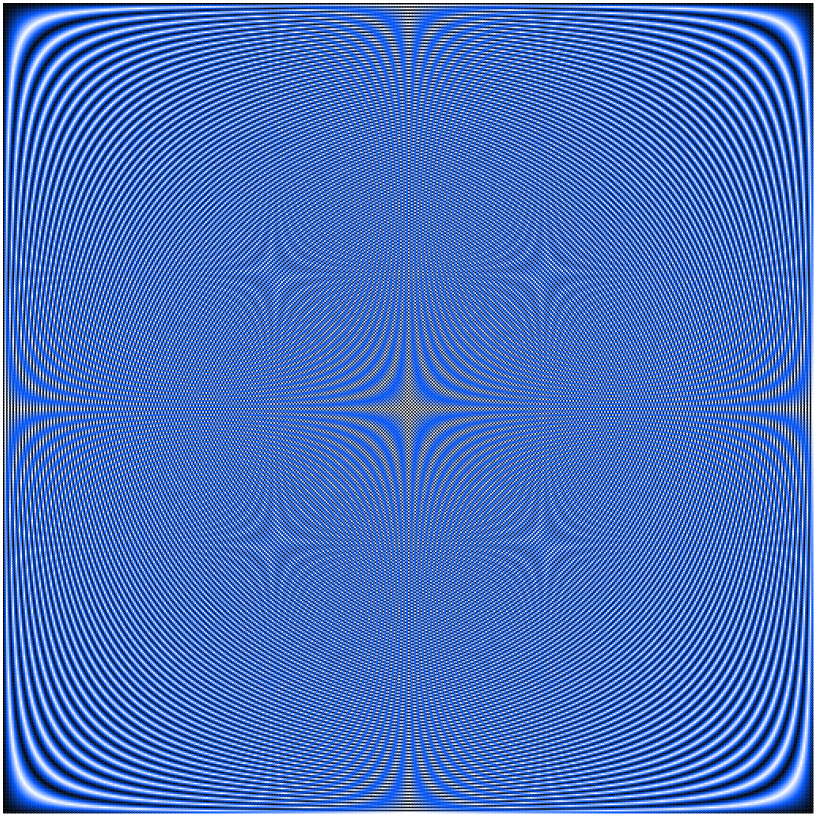 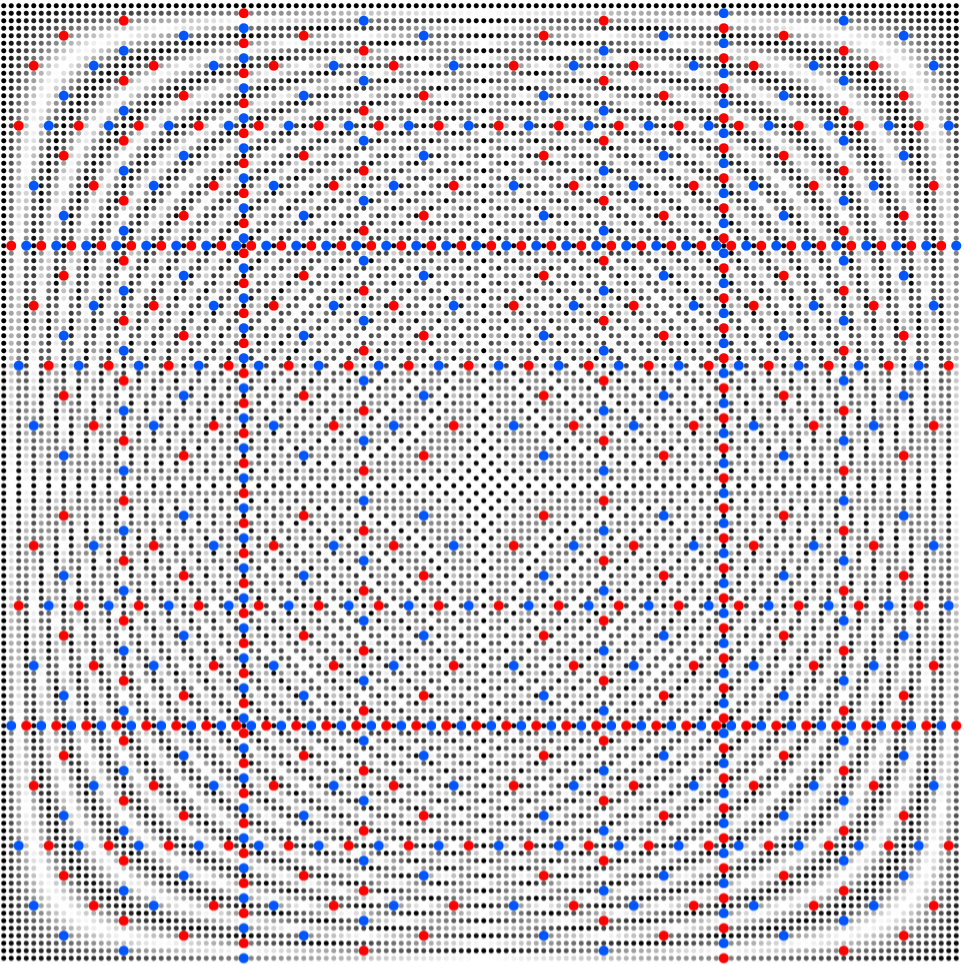 One observes that the big square is divided successively into squares of sidelength $n/k$.

For $n=257$, i.e. a prime number, the grid patterns vanishes, but the hyperbolic structure remains intact: 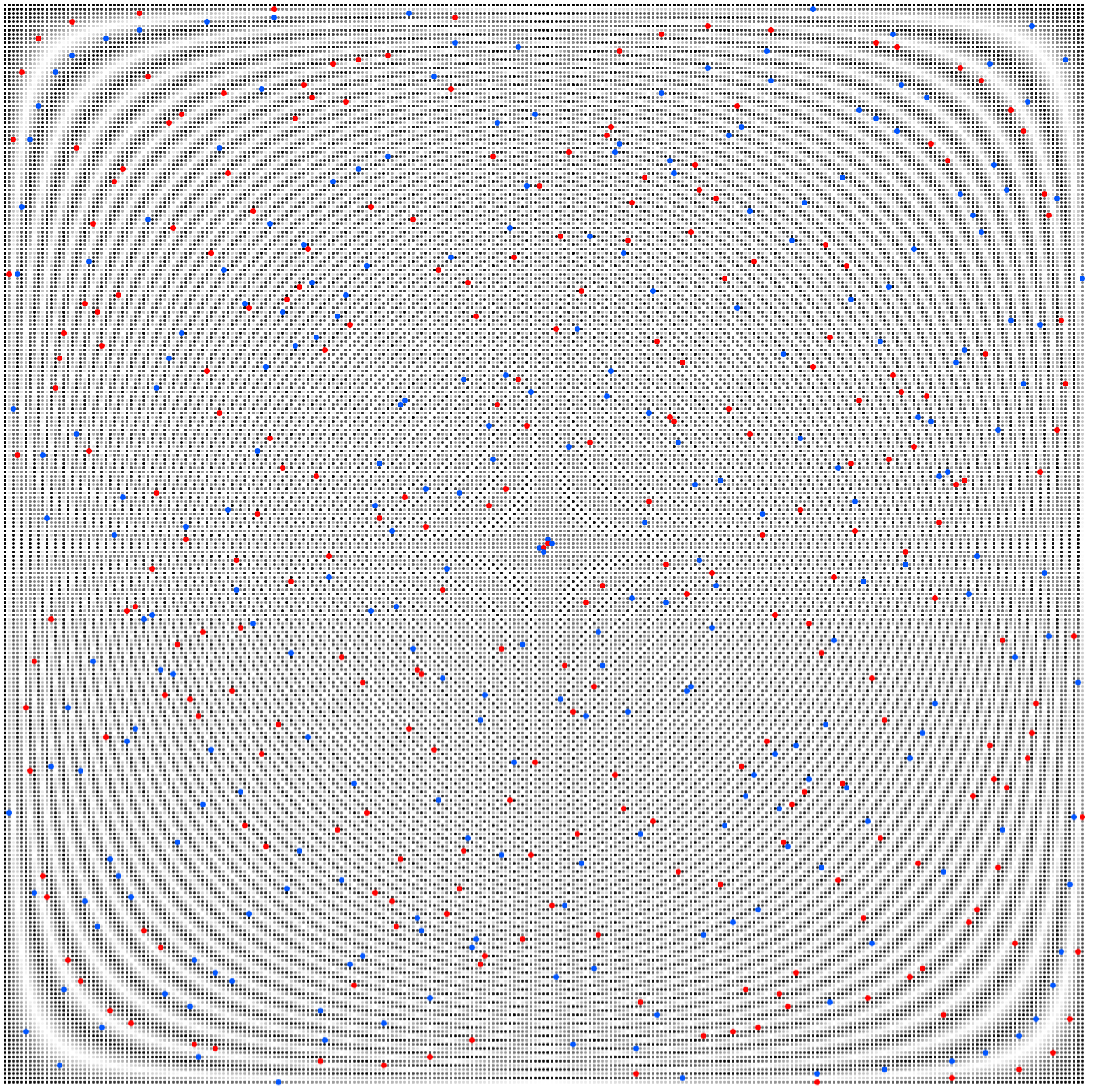 Concerning the last, i.e. the second question which concerns ((sub)centers of) hyperbolas:

(Note the modular/toroidal structure of the graph.)

The "size" of the hyperbola shrinks with $1/k$, its "distinctness" is maximal along the diagonals. 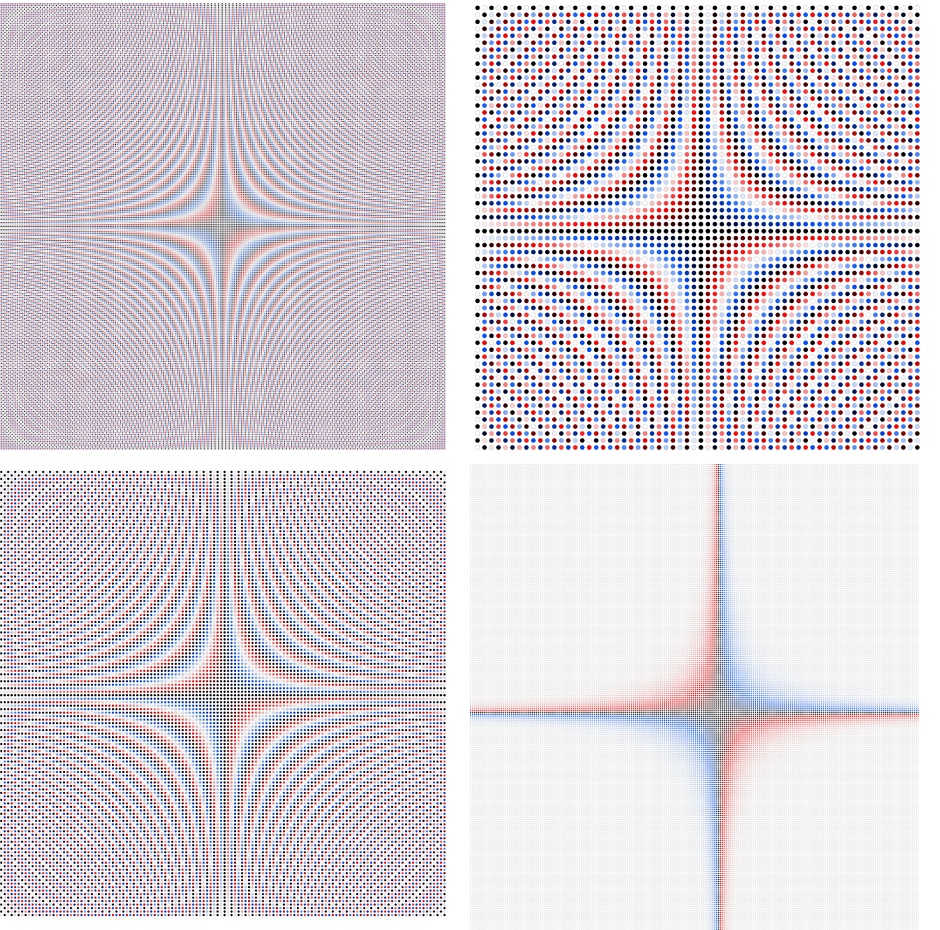 Not the answer you're looking for? Browse other questions tagged group-theory number-theory cyclic-groups visualization or ask your own question.

4
Prove that these two integer groups have equivalent Cayley tables.
6
Computing orbit representatives for a group action
3
In how many different ways can the faces of a regular dodecahedron be colored?
0
Rotation and radial translation together in a group?
2
Visualizing complex functions $f: \mathbb{C} \rightarrow \mathbb{C}$
2
The slope of $nx\ \%\ m$
12
Explanation of a regular pattern only occuring for prime numbers