What does this symbol signify ('\Game' in mathcha.io editor)?

While playing around in an online LaTex-like editor (mathcha.io) I came across the following symbol, entered with '\Game': 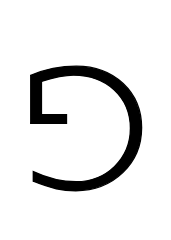 Can anyone tell me what it signifies? All my online searches came up short on this one.

In descriptive set theory, $\Game$ is the game quantifier - taking $f$ to be a variable ranging over infinite sequences of natural numbers, "$\Game f(\varphi(f))$" means "Player $1$ wins in the game where players $1$ and $2$ alternate playing natural numbers and player $1$ wins iff $\varphi$ holds of the resulting infinite sequence." So for example, if $\varphi$ is "is eventually periodic," it's easy to show that $\neg\Game f(\varphi(f))$ - one way for player $2$ to win the relevant game is to just make sure that they always play a number larger than any number which has occurred so far.

(Note that making $\varphi$ weaker only makes it easier for player $1$ to win, so $\Game$ is a monotonic quantifier - like $\exists$ and $\forall$, and unlike something such as "finitely many" or "an even number of.")

Of course, games on naturals aren't the only games that show up in logic, and so the game quantifier can be generalized to a wide variety of settings; but the usage above is I think the most common.

As the name suggests, ⅁ is a symbol sometimes used in Game Theory to denote an arbitrary game. Some authors call it the "game projection" operator, like in this paper by János Flesch and Arkadi Predtetchinski.