Definition of a filtration on a ring, module, algebra

Question 1: Do these definitions apply only to commutative rings/algebras? Are gradings used in noncommutative algebra?

I wish to have a general enough definition of a filtration on a ring/module/algebra as well:

Most books define a filtration as a sequence. There are some generalizations: 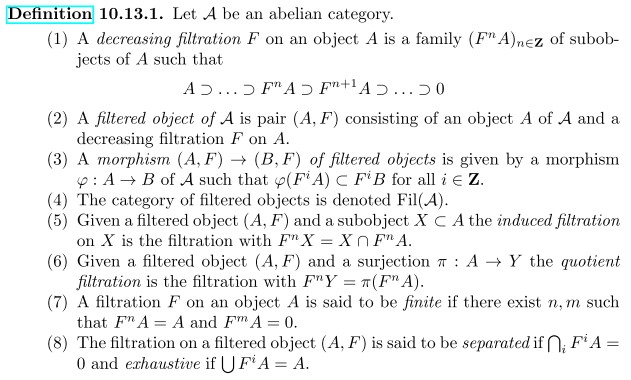 Question 2: What is the right definition of a filtration of a ring/module/algebra in regard to 1,2,3? If $R$ is noncommutative, do we need to take left or two-sided ideals to obtain a filtration? Does the index set need to be totally ordered, or a monoid, or a group, or a directed set?

I realise the answer is probably going to be "depends what you want to do with a filtration", and since I don't yet know what is or can be done with filtrations, or even what their main use is, I'll just say that my motivation comes from Algebraic Topology, Homological Algebra, and Commutative Algebra. I would simply like to have a definition, general enough so that I am not confused when I take 10 different books and each has a bit different definition of a filtration.

Not very detailed exposition (I expect you don't know most of the terms, but I am just listing things I know that form examples to the answer of your questions)

(Q1) Finding a good grading on (usually finite dimensional) associative algebra has become one of the main trend in recent years in representation theory. The gradings people are looking for are usually the Koszul grading, i.e. a grading so that the algebra is Koszul. People who are more DG(differential graded)-oriented may need more than just a positive Z-grading. This comes under the name of Adams grading (still a group-graded theory anyway)

Other use of grading I know of: grade the preprojective algebra of finite type and take a smash product with it, one would arrive to a mesh algebra.

In a nut shell, as you have said it yourself, it really depends on what you want at the end before you actually start looking for a grading.

(Q2) Again I can only give examples that I know of. If $A$ is quasi-hereditary algebra, then there are certain objects called the standard modules, which exhibit certain nice (homological) properties. The category of the objects which can be filtered by standard modules have very interesting homological properties (this actually happens not only in quasi-hereditary algebras), such as, they are contravariantly finite.

If $A$ is Koszul algebra, then the Koszul dual $A^! := Ext_A^\bullet(A_0,A_0)$ in fact "determines" the category of modules which are filtered by the 0-th graded piece $A_0$. When people try to generalise Koszul theory, one thing they would study is that if the algebra $Ext_A^\bullet(M,M)$ can "determine" the category of objects filtered by $M$, etc. etc. A good exposition on this direction is Keller's Introduction to $A_\infty$ algebras and modules.

Filtration, sometimes, comes very close to determining some sort of useful/interesting resolutions (for Koszul algebras, the filtration gives you the projective resolution). Whether you want a filtration by two-sided ideal, or one-sided ideal, or submodule, is entirely up to you. As you have expected, it really depends on what you want to do.

EDIT: In response to OP comments. I think you need to understand filtrations and gradings are two different concepts and should not to be confused the two. I myself fell into this trap before. This is understandable, because, most of the time people talk about positive $\mathbb{Z}$-grading, so then you can get a filtration $\bigoplus_{i\geq 0} A_i \supset \bigoplus_{i\geq 1} A_i \supset \cdots$. However, as the comments to the question already tell you, in order to have 'filtration', you need a concept of inclusion for the objects in your category (warning: this is not really true, but I should not confuse you further), and you usualy need "quotient" for objects so that you can talk about things like "filtered by a family of objects". The first definition you wrote down in the comment looks more like a grading thing rather than a filtration thing (sorry for bad wording). The subscript appearing in a grading has significance in the study; but the subscript appearing in a filtration, is merely used to label the position of an object in the chain (at least I would choose to think about them this way).

TBH, I don't understand why you need to be so precise on whether you should choose one-sided or two-sided ideal for a ring (for me, I look at algebras). You should start by thinking what you want at the end; or if you don't know what you want at the end, why don't you try fiddle with some examples first and see which kind of filtration would give something interesting? May be you want to define a type of filtration on something you are studying, I guess you can, for example, write down the definition you had in your mind first, and go around asking people and see what they think?

Again, take quasi-hereditary algebras as example; such algebra is required to possess a chain of inclusions of some special two-sided ideal (a filtration of the algebra). On the other hand, you can successively take the (Jacobson) radical for an algebra, and this gives also gives you a filtration of the algebra. $A \supset Rad A \supset Rad^2 A \supset \cdots$. But these are two entirely different filtrations, and they have different uses.

"Question 1: Do these definitions apply only to commutative rings/algebras? Are gradings used in noncommutative algebra?"

Yes, they are used. For example, see

2
A simple module versus a simple ring
8
Definition of graded rings
3
Should one interested in commutative algebra learn the "noncommutative complications" of homological algebra?
1
Counterexample request: a surjective endomorphism of a finite module which is not injective
0
subring not graded
0
Precise definition of direct summand of a module