Why are these not manifolds?

I don't understand visually or analytically why the three images with arrows are not manifolds. 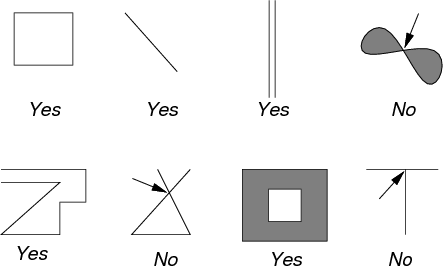 It would be nice to have an intuitive explanation too why they are not manifolds, similar to this explanation for what is a manifold:

And then, how can we prove that the square, the line are manifolds?

I have some thoughts, please judge if they are correct. I will refer to the figures by number 1-8, with the top left rectangle being 1, the top right bow being 4, and the bottom right T-shape being 8.

Mainly, I understand homeomorphism in the above examples to be something like, if we zoom in as much as possible on each point and think about what the infinitesimal neighborhood around that point looks like, does it look like a line ($R^1$) or plane ($R^2$)?

For Examples 6 and 8, look at what happens if we take a small neighborhood of the troublesome point, and remove that one point. It cuts the neighborhood into four connected components (for #6) or three components (for #8), while a line segment would be cut into two components. That number of components is a purely topological property - it's invariant under homeomorphism. So, then, neighborhoods of the troublesome point where the curves cross are not homeomorphic to line segments, and Examples 6 and 8 aren't (1-dimensional) manifolds.
This is an informal version, but the argument here can be made rigorous.

Examples 4 and 7 don't really fit with the other examples as shown - they depend on how we handle the boundary curves.

If we exclude those curves completely, both sets are manifolds. Example 4 has two connected components and Example 7 has one component (with a hole in it).

If we include those boundary curves completely, both sets aren't manifolds. Anywhere on the boundary, we don't have a radial neighborhood.

If we include some but not all points on the boundary curves - that's a hard notion to convey in a picture like this.

Now, one thing to watch with your intuition - at this level, there's no difference between the corners in Example 7 and random points on the edges. Any wedge shape in $\mathbb{R}^2$ is homeomorphic to any other wedge shape, regardless of angle. That includes $180^\circ$ angles. We can straighten out the kinks in the boundary freely, if all we require of the maps is continuity (in both directions).
For essentially the same reasons, the corners in examples $1$ and $5$ aren't any different from points on the straight parts.

And then, how can we prove that the square, the line are manifolds?

The line - well, we want to show that it's locally homeomorphic to part of a line. Since it's globally homeomorphic to a line (the identity map), just use that. If we didn't have that $\mathbb{R}^n$ is an $n$-manifold, we would tear the definition up and start over.
For the square, first show that it's homeomorphic to a circle. Draw a circle with the same center. On each ray from the center, map the intersection of that ray with the square to the intersection of that ray with the circle. That map is a homeomorphism.
From there - have you shown that the circle is a manifold?

Not the answer you're looking for? Browse other questions tagged general-topology manifolds or ask your own question.