What singular link is this?

These structures are linked by alternately weaving over and under each other. There are singularities at the four poles where there are $N$ crossings.

Is this link trivial or non-trivial? Is it prime or not prime? What questions could one ask about the complement of this structure?

This is what I'm getting from your description: 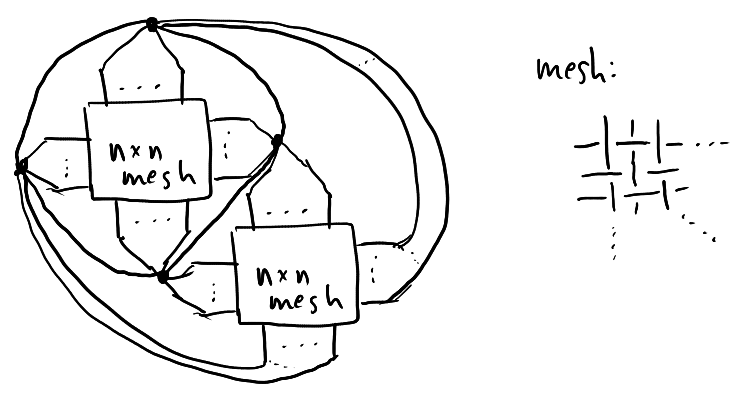 This is a diagram from a stereographic projection near one of the four singular points. The relationship to the number of geodesics is that $N=n+1$. There is a bit of an ambiguity because there are two choices for each mesh --- is it "over-under" or "under-over"? --- but it doesn't seem to matter much for the questions you ask.

My interpretation of equivalence is that two of these things are equivalent if there is an isotopy carrying one to the other while preserving the singularities along the way. This is what treating this as a four-vertex spatial graph would give us.

There is a question of what a trivial spatial graph ought to be. Let's say it's whether there is a diagram for it without crossings. If $n\geq 2$, then if you take the subgraph from first two rows and first two columns of one of the two meshes, you get the two-component link L4a1. Thus, the spatial graph is nontrivial. The $n=0$ case is trivial, and for the $n=1$ case it depends on what the two crossings are (the earlier ambiguity). One case is trivial, but in the other the two loops composed only of mesh edges form a Hopf link.

What should prime mean? For spatial graph theory, it means there is a sphere in $\mathbb{R}^3$ that intersects the graph in exactly two non-vertex points, where each side of the sphere is a non-trivial spatial graph in some sense. From the perspective of the graph itself, the points when removed must disconnect the graph into two pieces. When $n\geq 1$, the graph is $3$-edge-connected, so the two cut points must lie on the same edge. But any portion of any edge is not knotted (that's not rigourous; I have a longer proof involving looking at the intersection of a sphere with a checkerboard surface of the diagram), so the spatial graph is prime. For $n=0$, it is just an unknot.

0
Unlinking the toroidified Hopf link, overhand knot, in $\mathbb R^4$?
0
What link is this?
2
Alternating Link crossings.
0
What link is this brunnian link?
0
Trouble in understanding the proof of the existense of the HOMFLY polynomial