Solving a recurrence relation in series of triangles. 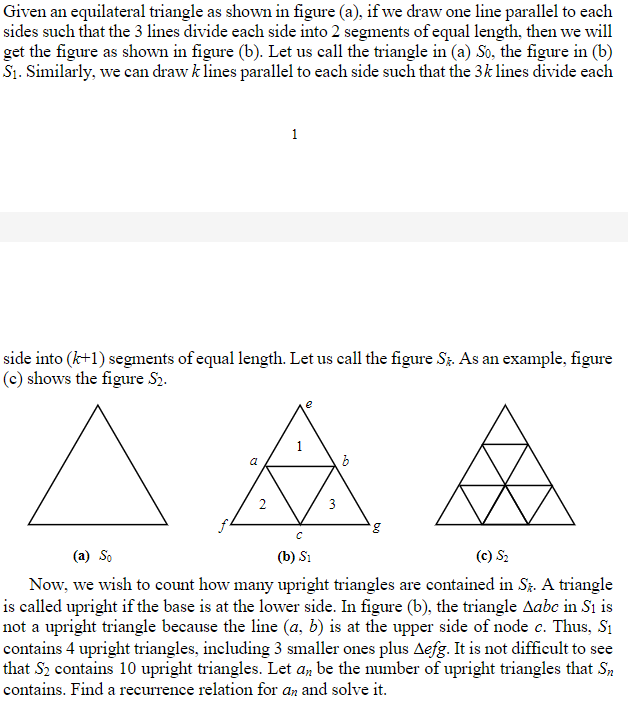 I made a relationship of the number of parallel lines to the number of upright triangles. This gave me the following open formula equation. I used that equation to recursively solve for a closed formula. But my final equation falls off and does not match the sequence for some of the numbers. Pic#1, Pic#2 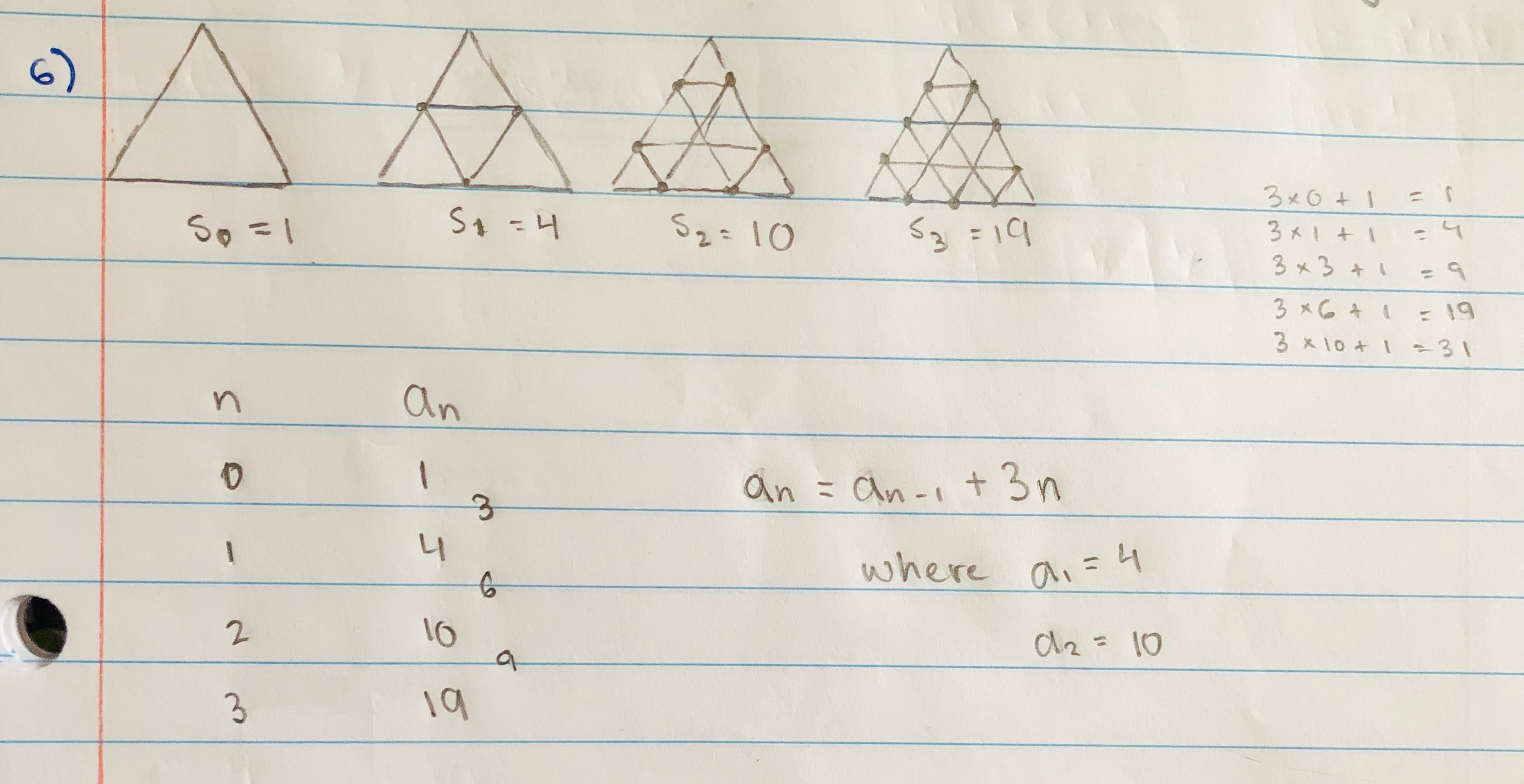 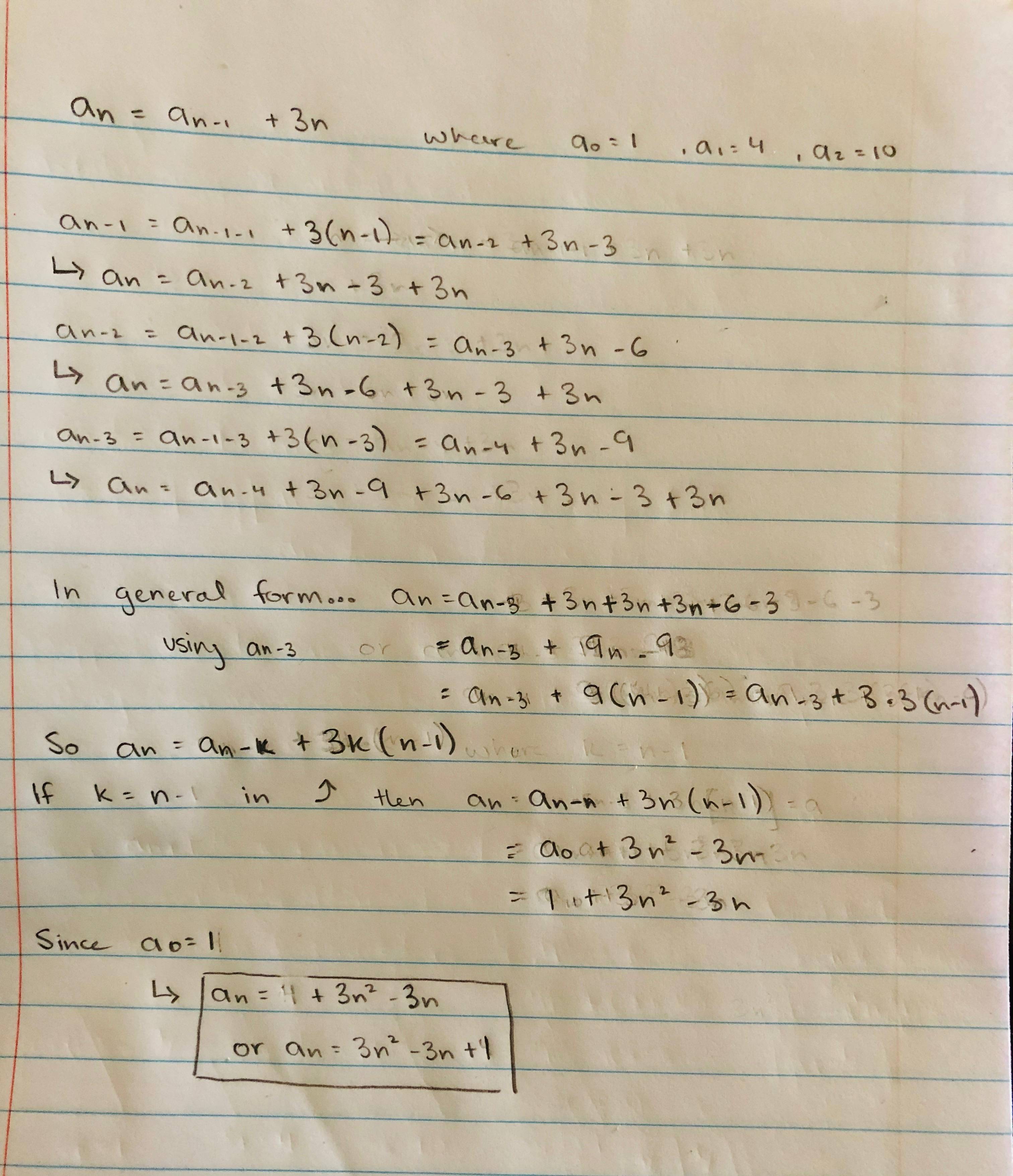 Removing the bottom row from $S_n$ leaves a figure identical to $S_{n-1}$. Therefore, $a_n-a_{n-1}$ is the number of upright triangles in $S_n$ which are not contained in this upper $S_{n-1}$. In other words, $a_n-a_{n-1}$ counts the number of triangles which lie flat on the bottom of $S_n$. Such a triangle is uniquely specified by its upper vertex; given the upper vertex, you can recover the triangle by drawing sides downwards at $60^\circ$ slopes. Since there are $1+2+\dots+(n-1)=\binom{n}2$ possibilities for this upper vertex, you get $$ a_n=a_{n-1}+\binom{n}2 $$ This is a non-homogeneous linear recurrence. Can you solve this for $a_n$?

Not the answer you're looking for? Browse other questions tagged combinatorics discrete-mathematics or ask your own question.

1
Proving by induction that an equilateral triangle will always be divided into (n+1)^2 small triangles?
1
Number of possible triangles
0
Derivation of triangular number line segment recurrence relation
4
What is number of line segments whose vertices are in $S$ and whose length is a positive integer?
1
Beautiful Triangles
3
Why are there $\frac{(A+1)(A+2)(B+1)}{2}$ triangles in this grid?
16
Counting the number of triangles inside $3-4-5-$triangle [Found in Arabic Math book: الرياضيات | هندسة الإحداثيات | الإحصاء]
2
Prove $\sum_{b=0}^{n-1}b\binom{n+1-b}{2} = \binom{n+2}{4}$
8
Nonattacking "queens" on tiled triangles