How to show convergence of Frank-Wolfe algorithm ( or conditional gradient method)?

Let $g(w)$ be a differentiable convex function. Frank-Wolfe algorithm over a convex set $C \in \mathbb{R}^n$ is defined so as to find the local minimum of the function:

The intuition behind the the first step of Frank-Wolfe algorithm is that we find the closest vector to the negative gradient (by closest I mean the projection of $s_{t+1}$ onto $-\nabla g(w_t)$ is maximum). The intuition behind the second step arises from the fact that we start off from $s_1$ which is in $C$ and chose $w_{1}$ so as to be in $C$ using the convex combination.

I have drawn the following picture to better understanding. 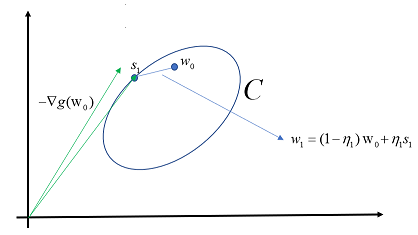 Note: If $C$ was a polytope, then $s_1$ is at the vertex of the polytpoe because $(1)$ became Linear Programming.

2- What is the proof of convergence?

1
The timestep of Forward–backward algorithm
1
Online convex programming: Projection followed by normalization
6
Constrained Optimizatoin: The Frank-Wolfe Method
0
Does projected gradint descent(pgd) results in the same minimizer as the one given by unconstrained gd and projected back on the constrained set?
0
Is Frank Wolfe a descent algorithm?
0
Equivalence of Block Coordinate Descent (BCD) and Block Coordinate Gradient Descent (BCGD) for the Quadratic Case
2
Why Does the Projected Gradient Descent Method Work?
1
How to write Frank-Wolfe algorithm in two steps optimization problems?
1
What is the difference between Frank-Wolfe and Interior-Point Methods?