Which closed space curves of constant curvature are there?

Two families spring to mind: circles and closed helices around a torus (both having - in addition - constant torsion).

What other families of curves of constant curvature are there?

Added: If it were possible to wind a curve around a cylinder, and to bend the cylinder back to itself - while keeping the curvature of the helix constant by appropriate adjustments -, thus forming an eventually arbitrarily knotted torus with a closed helix on it, one could have every knot as a curve of constant curvature. The paper Knots of Constant Curvature might be related to this point of view. It is interesting, but it is not exactly what I am looking for.

Can - for example - the trefoil knot be realized by a curve of constant curvature?

Here is a numerically computed solution in the affirmative. 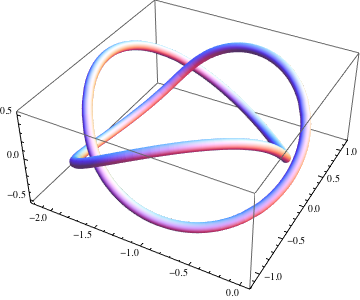 It is a $C^2$ curve with constant curvature $\kappa=1$ and piecewise constant torsion, made by gluing together six pieces of helices. Three of the pieces have torsion $\tau_1=-0.3$ and arc length $2s_1\approx4.13159$, and the other three have torsion $\tau_2=2$ and arc length $2s_2\approx0.67712$. The image below shows the six pieces, along with the $xy$ plane illustrating the three-fold symmetry about $z$. More details follow. 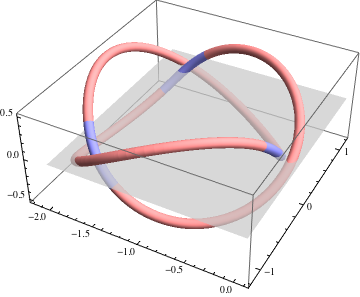 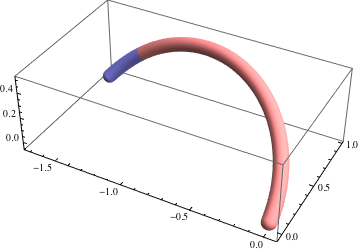 4
Smooth Monotone $\mathbb{R}^3$ curve with constant (nontrivial) curvature
0
How to identify a curve
3
What is the radius of torsion, geometrically?
0
Find wrapping angle of helix on a torus
1
Do Carmo 1.5.18 - Bertrand curves
11
Is there a generalization of the helix from $\mathbb{R}^3$ to $\mathbb{R}^4$?