(Hint: Solve the problem recursively by removing two nodes and their edges in $K_n$. From the output of recursive call, you get $(n − 2)/2$ spanning trees for $K_{n−2}$. Extend those trees to be spanning trees for $K_n$ and then construct a new spanning tree to complete the job. PS: A collection of sets $S_1,\dots,S_k$ is a partition of $S$, if each $S_i$ is a subset of $S$, no two subsets have a non-empty intersection, and the union of all the subsets is $S$.) 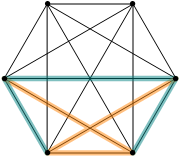 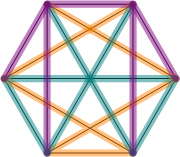 On the left, we have (in orange and teal) a partition of the edges of a $K_4$ into two spanning trees. The $K_4$ is sitting inside a $K_6$ that we want to decompose. So on the right, we extend the orange and teal trees by two edges each to make them spanning trees of $K_6$, and add a purple tree consisting of the remaining edges.

For any particular step, it is not too hard to make this work. The important thing is to figure out a pattern to tell you how to go from $n-2$ to $n$ for any even $n$. For this, you should try to do something as symmetric as possible, because symmetric things are easiest to describe.

For example, if we're adding two vertices $x$ and $y$, then there's one "unusual" edge: the edge $xy$. I made this edge part of the new, purple tree in the diagram above, because adding it to just one of the existing trees would break symmetry. You could still do it - it would just be harder to describe what you're doing generally.

Not the answer you're looking for? Browse other questions tagged graph-theory recursion trees or ask your own question.