What does do Carmo mean here and also what is a curve parametrized by arc length?

From do Carmo Differential Geometry: 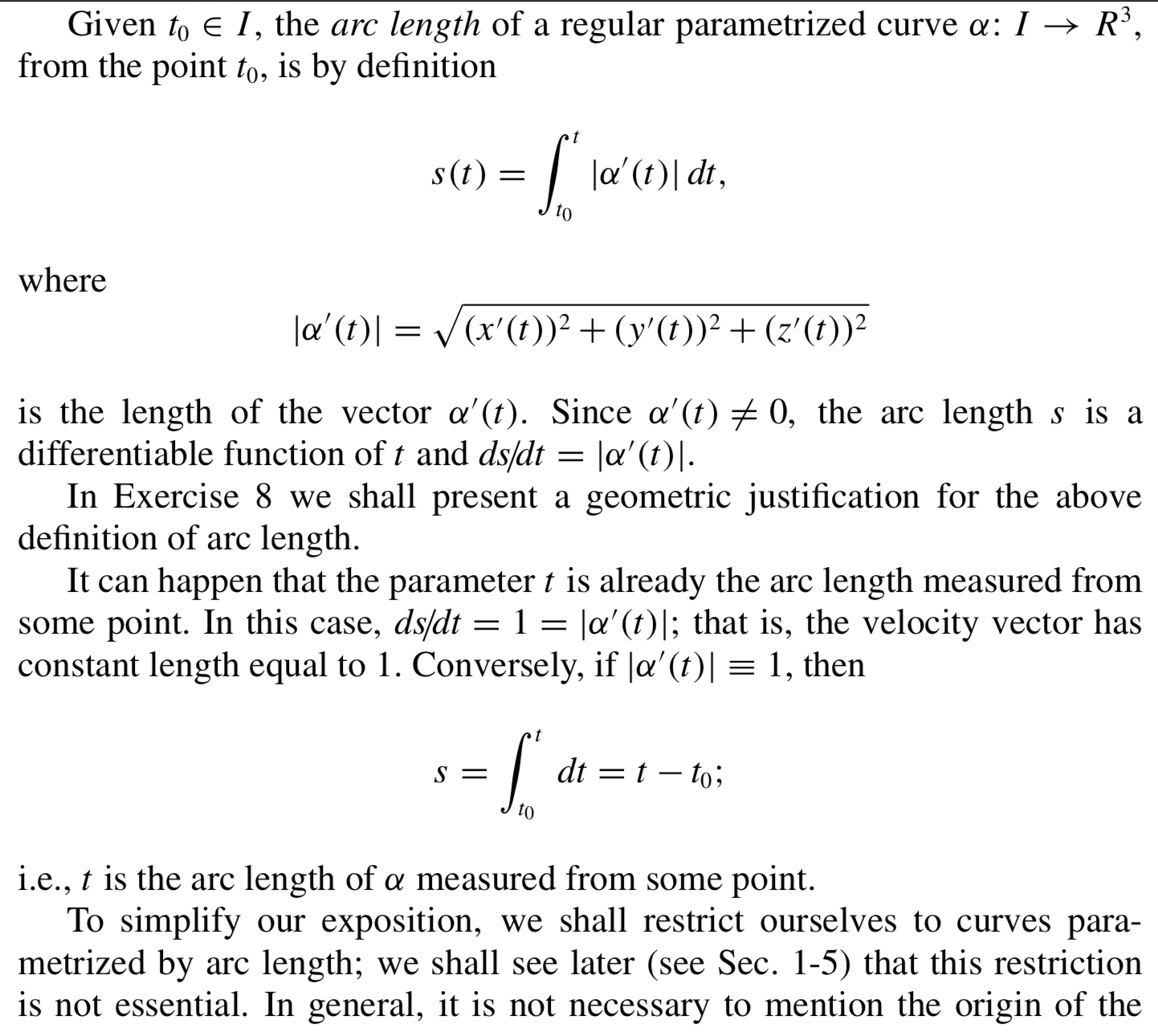 In the third paragraph, Do Carmo says:

it can happen that the parameter $t$ is already the arc length measured from some point.

What does he mean by this?

Also, what does he mean by curves parametrized by arc length?

A curve $c: [0,1] \to \mathbb{R}^3$ can be parametrized in many different ways. All parametrizations will have the same image $c([0,1])$ in $\mathbb{R}^3$ (or more generally $\mathbb{R}^n$) as subsets of the ambient space but they can have different velocity vectors at different points. For example, you can switch $t$ with $2t-1$ over $[0,1]$ and you'll get a parametrization that is twice faster because of the chain rule.

In general, assuming that our curve is at least twice continuously differentiable, when we want to compute curvature or torsion, it's easier to deal with curves having the constant speed $1$. Think about acceleration which is related to curvature, for example. Physically, we know that a change in velocity exerts a force on us by Newton's second law of motion $\vec{F}=m\vec{a}$. But a change in velocity can be caused by a change in its magnitude or a change in its direction. In geometry, we're interested mostly in the later kind of change which depends on the shape of our path (curve) rather than the speed we're traveling at.

Note that the arc-length of a curve from its starting point up to $t$ is defined as:

This means that we are to take "$t$ is already the arc length measured from some point" to be the same statement as $P$. And $P$ is the statement that $s=t-t_0$.

I will attempt to give an intuitive explanation instead of an analytical one: Parameterizing a curve essentially means identifying the position along the curve for a given value of a parameter - that is, relating the curve (in physical space) with a copy of the real line (the parameter space). The parameter can have various physical interpretations and units.

For example, when one drives along a road, possible options to identify the position can be:

In the first case, the parameter is the time since starting, measured through standard methods - but different drivers can be in different places after driving for the exact same amount of time.

In the second case the parameter is the distance driven, or the arclength of the road from the starting point until that position. That is usually identified by markers along the road, and no matter who drives, 20 km from the start point is going to be the same place.

The arclength parameterization is essentially a way of identifying the position after moving a certain distance along the curve from a fixed starting point.

Not the answer you're looking for? Browse other questions tagged calculus differential-geometry or ask your own question.

10
About the definition of curvature