Does it exist an approximation using sums and a way to do the computation with more accuracy both by hand to find the length of a spiral?

I have found this riddle in my book and so far which may require the use of calculus (integrals) to which I'm familiar but not very savvy with it. Since, I've not yet come with an answer. I wonder if such problem can be also solved using sums in the scope of college precalculus like an approximation (proven) which could be solved by hand even the calculus method which I also feel might also help me.

In a research facility in Taiwan a group of technicians built a new optical disk which stores information in a spiral engraved in its bottom face named "lecture side". Under the microscope it can be seen that the spiral begins in a region starting from $\textrm{2.6 cm}$ from its axis of rotation and it ends at $\textrm{5.7 cm}$ from the center of the disk. It can also be seen that individual turns of the spiral are $0.74\,\mu\textrm{m}$. Using this information calculate the length of the entire track.

So far I've only come with the idea of using the spiral of Archimedes, whose formula is given as follows:

However, I'm not very familiar with the realm of polar coordinates or how can this equation be used to solve my problem. To better illustrate the situation, however I've drawn this sketch to show how I'm understanding the problem. 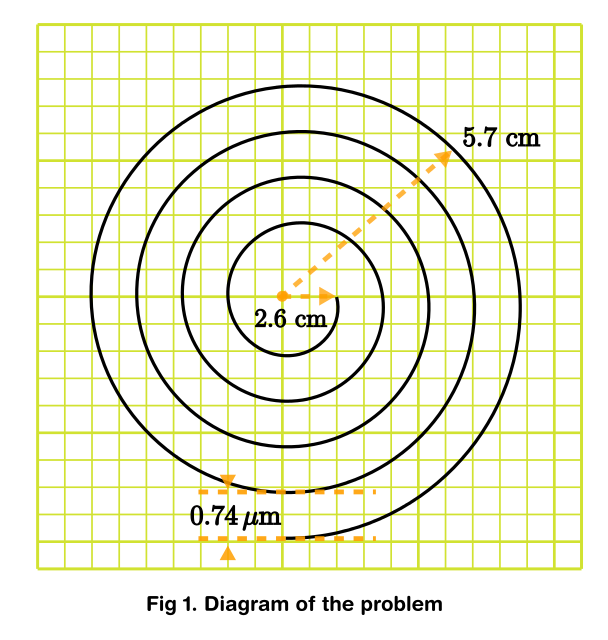 I've included a cartesian grid, which well "may not be" in scale. But gives an idea of how I believe it is intended to be said.

I've really wanted to offer more into this such as an attempt into solving, but so far I've ran out of ideas.

However, I've come with the idea that the solution may be linked with finding how many turns are in the "readable sector" which is alluded in the problem.

To calculate this what I did was the following:

By evaluating this short conversion factors I obtained

And that's it. But from there I don't know how to relate this information with what would be needed to solve this riddle. The answer in the book states that the track's length is $1.09\times 10^{4}\,\textrm{m}$. But again. I don't know what can I do to get there.

So far I've did some preliminary research in the community and I've found this but it isn't really very helpful as the example relates to a vertical helix going upwards around a cylinder and my situation doesn't fit into this. Other proposed methods such as the one seen here propose using calculus and this also is referenced here. Needless to say that the only existing solution doesn't give much details of how the supposed formula works. It also contributes to the problem that I'm not very savvy with it and since this problem was obtained from a precalculus book, I aimed my question to. Does it exist a method to make this computation relying in college algebra?. With this I don't intend to totally discard a calculus approach, but an answer with would really be very pedagogical for me is one which can show me the two methods, so I can compare which can be better according to my current knowledge so I can practice more in what I feel I'm lacking.

Well that's it. I do really hope somebody could help me with the two methods, one using algebra and another using calculus.

Doing likewise for the other loops will give
you an approximation for the total length.
Take into account the last loop is 1/4 of a circle.

Another approximation for s the length of the spiral.
Let c = 2$\pi$, r the inner radius, w the width
between each arc. n the number of turns. Then

This can be solved using the formula for area: $A=L\times W$, or equivalently: $L=\frac AW$

Not the answer you're looking for? Browse other questions tagged calculus algebra-precalculus euclidean-geometry or ask your own question.

3
How To Calculate Length Of Screw Thread?
0
Archimedean spiral: arc length of coil