What do “3 different points” have to do with linear dependence in determining a unique circle?

In learning about the general formula for a circle: $$(x-h)^2 + (y-k)^2 = r^2$$ my book states that $3$ points are sufficient to guarantee the solution (or absence of solution) for an unique circle.

However, the book's explanation concludes with the statement:

"The equations can't be linearly dependent since the points that lead to them are all different". I am not particularly familiar with linear algebra so I do not understand the significance of this statement. Is there a visual representation of this statement that can help me understand what they mean?

Sometimes a few figures are worth a thousand words: 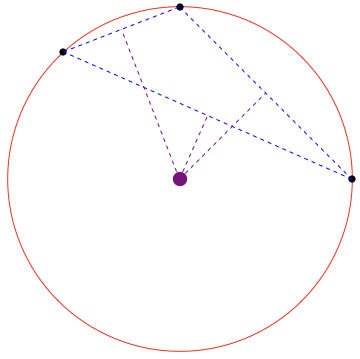 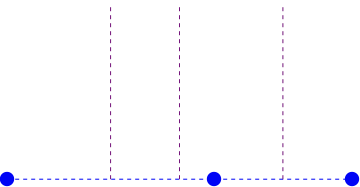 Top: Three non-collinear points determine a triangle, each leg of which will be a chord of the circle. A perpendicular to each chord must go through the center of the circumscribed circle.

Bottom: If the three points are collinear, then perpendiculars to their three defined segments are parallel, thus never meet, thus cannot define a circle.

The pictures in @DavidGStork 's lovely answer explain why the three equations produce a unique solution.

I want to add a discussion of the algebra, and a possible correction.

When the author writes

the intent is to tell you that you can't deduce the third equation from the first two. That means you really do have three independent conditions on the three unknowns, which is usually what you need to guarantee a solution.

This doesn’t have to do with linear algebra per se, although the idea of linear independence is central to that discipline. To state the claim differently, none of the three equations is redundant—none of them can be obtained by adding multiples of the other two to each other—because the three points are distinct.

Not the answer you're looking for? Browse other questions tagged linear-algebra circles or ask your own question.

21
How many points are needed to uniquely define an ellipse?

2
Solve for U confusion
2
Finding a parabola from three points algebraically
1
Quadratic form with Lagrange method
2
Finding equation of a circle given three non - collinear points
6
Finding the Center of a circle given two points and a radius (algebraically)
0
How this Linear Equations Got that solution with this form?
1
Find center of rational circle