History of definitions for an ellipse?

Recently I've been learning about ellipses.

It seems as though there are four (from what I've learned of so far) different ways to define ellipses, all which seem to be connected in kind of obscure ways: 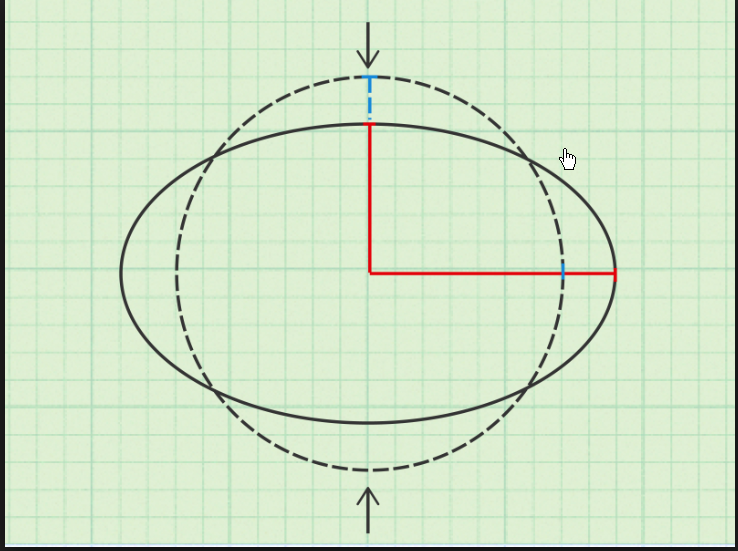 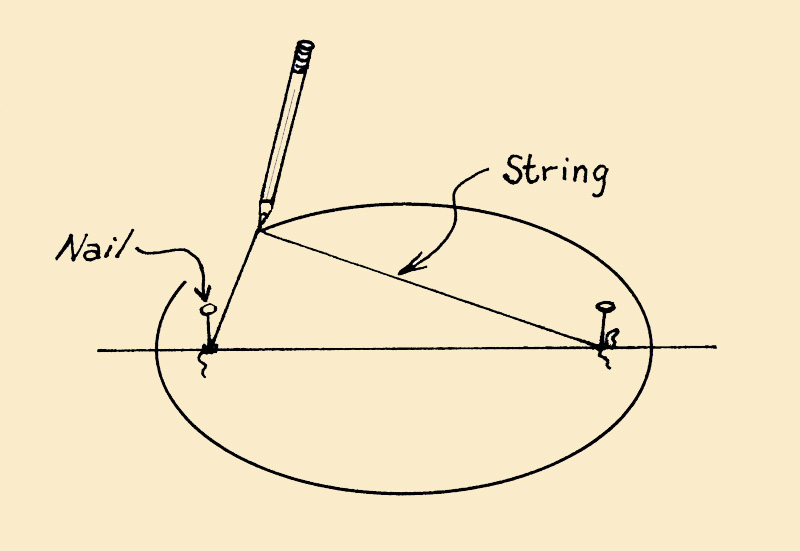 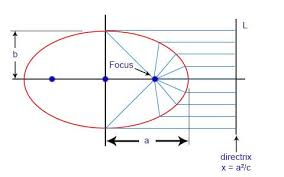 I'd really like to know more about the history of the ellipse.

Were all of these definitions discovered at around the same time? If not, in what order were they discovered, and by whom? Did the same people that came up with one definition somehow come up with others? And how did mathematicians see the connections between them, and realize they were looking at the same family of curves?

The connections between, for example, the "squashed circle" definition and the "constant sum of distances" definition are pretty hard to notice...who noticed that these were the same family of shapes? I mean, without being told that the foci DO exist, I'm not sure how I would be able to figure out, only from the squashed circle definition, that they indeed exist...(I asked this in another question, but in this one I'm more interested, about the history.)

This my answer is far from being complete, but can be useful. I apologize for all imperfections or mistakes. Various excellent sources can be found in French language.

In this work we learn that conic sections were likely discovered by Menaechmus (380-320 BC). The priority of Menaechmus is justified here or in this Wikipedia article. Menaechmus sufficiently advanced the theory of the conic sections so that in antiquity these curves were called the Curves of Menaechmus. The cones were obtained by rotating a right triangle around one of its short sides, and a conic section obtained as section of conic surface by a plane orthogonal to the generating line.

The picture from the work quoted bellow shows a rightangle, obtusangle or acutangle conic, as they were called.

Besides Menaechmus, other Greek geometers were studying conic sections and their properties before Apollonius. Some of them were

Apollonius of Perga (c. 262 – c. 190 BC) gave to the ellipse (acutangle conic), parabola (rightangle conic) and hyperbola (obtusangle conic) the names under which we now know them. He is famous for his writings on conic sections, and is often wrongly designated as their inventor. His (plagiarism?) is criticized by Eutocius, as quoted bellow.

The author of this text states,

On this point, it seems that our commentator [E] has been impressed by another "historian" of the theory of conics, Pappus. The presentation that he devotes to the treaty of Apollonius begins:
"Apollonius has given us eight books on the conics, having completed the four books of the Conics of Euclid, and having added four other books. Aristaeus, author of The Five Books concerning Solid Loci, still available today, following the Conics, had however, as the predecessors of Apollonius, called one of the conical sections the 'acutangle cone section', the another the 'rightangle cone section' and the other still, the 'obtusangle cone section'."

Skipping centuries, I would attract attention to Philippe de la Hire, 1640 – 1718 who was inspired by Apollonius. An abundant source is this thesis. De la Hire used an early projective method: Every conic section can be obtained from a circle by a projection. This method was developed in later centuries.

It is worth noting the approach of Steiner.

A nice proof that the focal definition of ellipse (sum of distances to two given points, foci, is constant), and ellipse as a section of a conic surface by a plane, is due to Germinal Dandelin (and Adolphe Quetelet) and is dated to 1822. The picture (bellow) is from wikipedia. 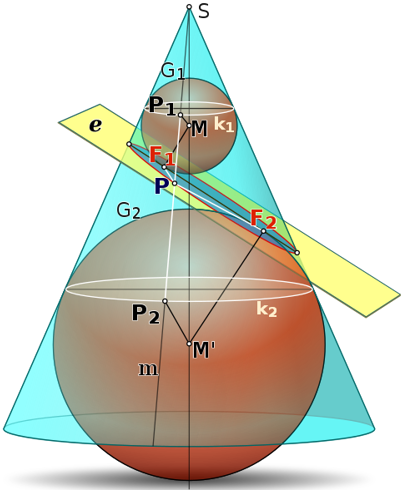 The article Conic sections on Wikipedia is excellent. For the early history of conics in Europe, see the paragraph Europe and the references therein.

The links provided in comments to the present question are useful as well.

Not the answer you're looking for? Browse other questions tagged definition conic-sections math-history or ask your own question.

6
What is the cone of the conic section?
3
How did people figure out that parabolas, hyperbolas, circles, and ellipses were conic sections?
6
How do we deduce that an ellipse, when defined as a "stretched circle", has foci?