It says that 'rudimentary knowledge' of model theory and recursion theory is assumed. One option I have is to read Kunen's Foundation of Mathematics to get the necessary prerequisites. I have no idea of what 'rudimentary' means, so assuming that I read all the model theory and recursion theory material in the text, this would entail reading 160 pages worth of material. I believe that, on top of my schoolwork, this would take at least 3.5 months to read.

However, at the same time, I am taking a mathematical logic course this semester which I believe more or less covers all of this material - which would defeat the purpose of my self study.

Therefore, I would like to know the FASTEST way to jump into the material in Kunen's 2011 text, preferably a recommended reading under 80 pages.

(for reference, here is the part of Kunen's Foundations of Mathematics table of contents covering model theory and recursion theory) 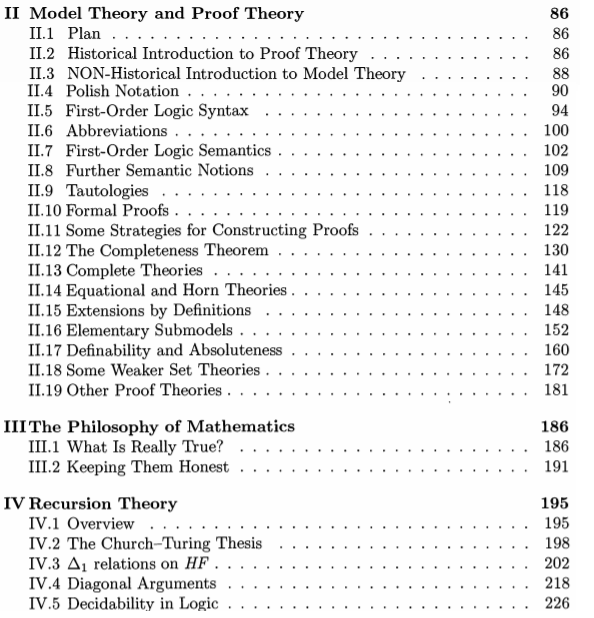 I actually haven't read Kunen. But I have taught axiomatic set theory before. The basics you should know are probably the completeness and compactness theorems, the knowledge of Łoś theorem is probably also there somewhere. These already encompass a lot of basic model theory and logic.

From the recursion theory parts, you should know what does it mean that $\Gamma\vdash\varphi$ is a decidable statement. This means that you need to understand coding of first-order logic into the natural numbers, and all the mechanism. Knowledge of the incompleteness theorem usually encompasses all of this, and more which is necessary from a philosophical point of view to understand certain more advance parts of set theory (e.g. large cardinal axioms).

From the little I've glanced through Kunen, he is sometimes overly formalistic to my taste. This means that he would bring up things from the second paragraph above more than I'd care for as a reader, and from a pedagogical point of view I find them to be a burden on the student. I know, however, several people who would argue the opposite point of view. So this is really up to you decide what you prefer.

To that end, if you are like me, and you still insist on reading Kunen (rather than one of the alternatives), you might as well work backwards. When you run into a statement you don't understand, look it up, and read "backwards" until you fill in the blanks. Not everyone can do it, but you can give it a go.

Just know that all in all, there are no shortcuts. In the end, the things you don't do properly, you end up forgetting really fast and it ends up a waste of your time in general.

Although Aristotle (or Euclid) said

There is no royal road (short cut) to geometry.

a way of rapidly assimilating ideas and getting reference material facts.

Now when you do this there is a danger that the way you comprehend subjects will be superficial; you'll have to 'get serious' and 'drill down' at times when focusing on an area of mathematics that you find compelling.

You might also find yourself drifting out at sea with no paddle.

Anecdote: Many years ago I knew an advanced (genius?) undergraduate mathematics major who was working with a professor to rapidly get to the frontiers of research in differential geometry. Although they did get some results, there was some 'burn out' involved. I googled his name and it looks like they haven't made any contributions in mathematics.