Conditional probability- what is wrong with my understanding

An insurance policy covers two employees of a company. The policy will reimburse no more than one loss per employee per year. It reimburses the full amount of the loss up to a company wide maximum of $8000$. The probability of an employee incurring a loss is $40$%, and is independent of the other employee's losses. The amount of each loss is uniformly distributed on $(1000, 5000)$. Given that one of the employees has incurred a loss in excess of $2000$, determine the probability that losses will exceed reimbursements.

What is confusing me is how to account for fact that the probability of an employee incurring a loss is $40$%. I would have thought that the total probability of at least one employee incurring a loss is $.40\cdot.60 +.60\cdot.40 + .40\cdot.40$, and the probability that both employees incur a loss (which is necessary for losses to exceed reimbursements) is $.40 \cdot .40$, and therefore the solution should be

However the solution says to just do:

What is wrong with how I wanted to do it?

I think there is some ambiguity in the question. I see two interpretations:

Interpretation (1): (This is how I would have interpreted the question.)

Interpretation (2): (This matches your solution above.)

You are given the condition that one employee incurs a loss so the $0.4$ probability only applies once for the other employee.

In terms of graphical representation, the red triangle represents the condition of exceeding $8000$, while the whole rectangle the total possible outcomes. 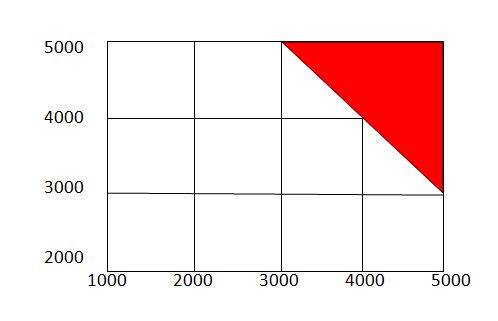 This is not intended as a complete answer (you already have a good one) but is too much to put in a comment.

The question indeed is ambiguous. If the employees are named Ray and Sam, the intended answer could be elicited by asking, "Given that Ray has incurred a loss in excess of $2000,$ determine the probability that losses will exceed reimbursements." Alternatively, it could be "Given that Sam has ... ." Your interpretation is, "Given that at least one of the employees has ... ."

But interpreting the question is only half the battle. The rest is to derive a numeric result correctly from that interpretation.

1
Normal Distributions and Claim Amounts
0
SOA/CAS Exam P Question (from previous exam (Nov. '09)): Finding percentiles
3
Conditional probability. What is the meaning of this explanation?
0
Joint Uniform Distribution SOA question 93
1
Is there a problem with this old Exam P actuarial probability question?
0
Understanding expected value of loss
2
Simple probability question - how to approach systematically, not overthink, or misinterpret?
1
Calculate the probability for the total insurance benefit -- solution verification
0
Cdf of a mixed distribution.