Adding an edge to a maximal planar graph results in topological minors of both $K_5,K_{3,3}$.

I was trying to prove this exercise from Diestel's book:

Show that adding a new edge to a maximal planar graph of order at least 6 always produces both a $TK_5$ and a $TK_{3,3}$ subgraph.

However, I don't understand a part of it when they try to find the $TK_{3,3}$ subgraph. They say:

Since $G$ has order at least $6$, there is another vertex $z$ distinct from those previously mentioned. The construction allows for two cases: either $z$ lies outside the region bounded by the topological cycle $vu_1wu_2v$ or it lies inside one of the faces of this region (they are all equivalent).

My question is why cannot $z$ be in the boundary of $vu_1wu_2v$? And it that were possible, the three disjoint paths from $z$ to $u_1,u_2,u_3$ might not be disjoint to the previous drawn paths, which seems to cause trouble when building the $K_{3,3}$-subdivision.

I think that solution is wrong already at the following point.

This is true, if $v$ has degree three. Otherwise it may fail (for instance, see the picture). 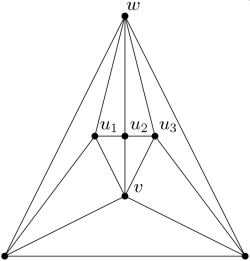 Not the answer you're looking for? Browse other questions tagged graph-theory proof-explanation planar-graphs or ask your own question.

5
Planar and non-planar graphs, and Kuratowski's Theorem
5
A doubt in the proof of Kuratowski theorem
3
Planar graph contains bipartite subgraph
0
Proof that every map produces a planar graph - Four Colour Theorem
3
Kuratowski's theorem in every case?
5
Finding $K_{3,3}$-subdivision when adding edge to maximal planar graph.
1
Does $K_5$ being a minor of a graph imply it being a topological minor of that graph?