In our analysis course, we just defined the following:

I came across this definition again at the beginning of measure theory, when we stated:

We ultimately want to integration functions $\mathbb{R}^n \to \mathbb{R}^m$, but because of the above definition we can, without loss of generality, restrict ourselves to the case $m = 1$.

My Question What is the intuition behind this definition, why does it make sense, if you will, ''on a deeper level''?

Addition, subtraction, scalar multiplication, scalar division, limits, and differentiation all act component-wise on vectors. You would need a good reason to make integration inconsistent with those!

For the "deeper level": However we define integration of vectors, we want it to be:

These axioms force it to act component-wise.

The Riemann Integral, say, is based on sums. The sums of vectors are defined component-wise. And different norms on $\mathbb R$ are topologically equivalent. Therefore, this is the exact thing you would end up with anyway for Riemann integrals if you defined them by analogy instead of component-wise explicitly.

On a much more general level, considering sets, mapping into a product $f:A\to B\times C$ is essentially really just two mapping $f_B:A\to B$ and $f_C:A\to C$. Similarly, mapping out of a disjoint union of sets is just two functions. This extends to products of more than two things and in particular to functions to $\mathbb R^n$. This phenomenon justifies the reduction you mention. It is a categorical observation valid in many different contexts.

Perhaps I'm missing the point of your quest for intuition, but we wish to define integrals component-wise because each component "should be independent" from one another. Having $\mathbb{R}$ as a codomain is really special; when you try to move towards $\mathbb{R}^m$ you lose the ability to totally order things in a natural way, and then all of your geometric intuition about signed areas and things being "under" curves flies out the window.

So how could you get around this? Well I'm not going to say there is not some extremely clever and brilliant definition lurking out there, but why not just pull apart your codomain until each piece looks like stuff you are used to? Why reinvent the wheel when it comes to interpretations of what the sums of strange hyeprvolumes are when we can simply iterate what we already know on multiple dimensions? And going back to my earlier comment, what possible other definition can we come up with that is compatible with our intution for the case of $m=1$?

The idea of component-wise integrals has a concrete geometrical meaning: to decompose a function curve by projecting it onto planes, then to take the (signed) areas of these projections in their respective planes. 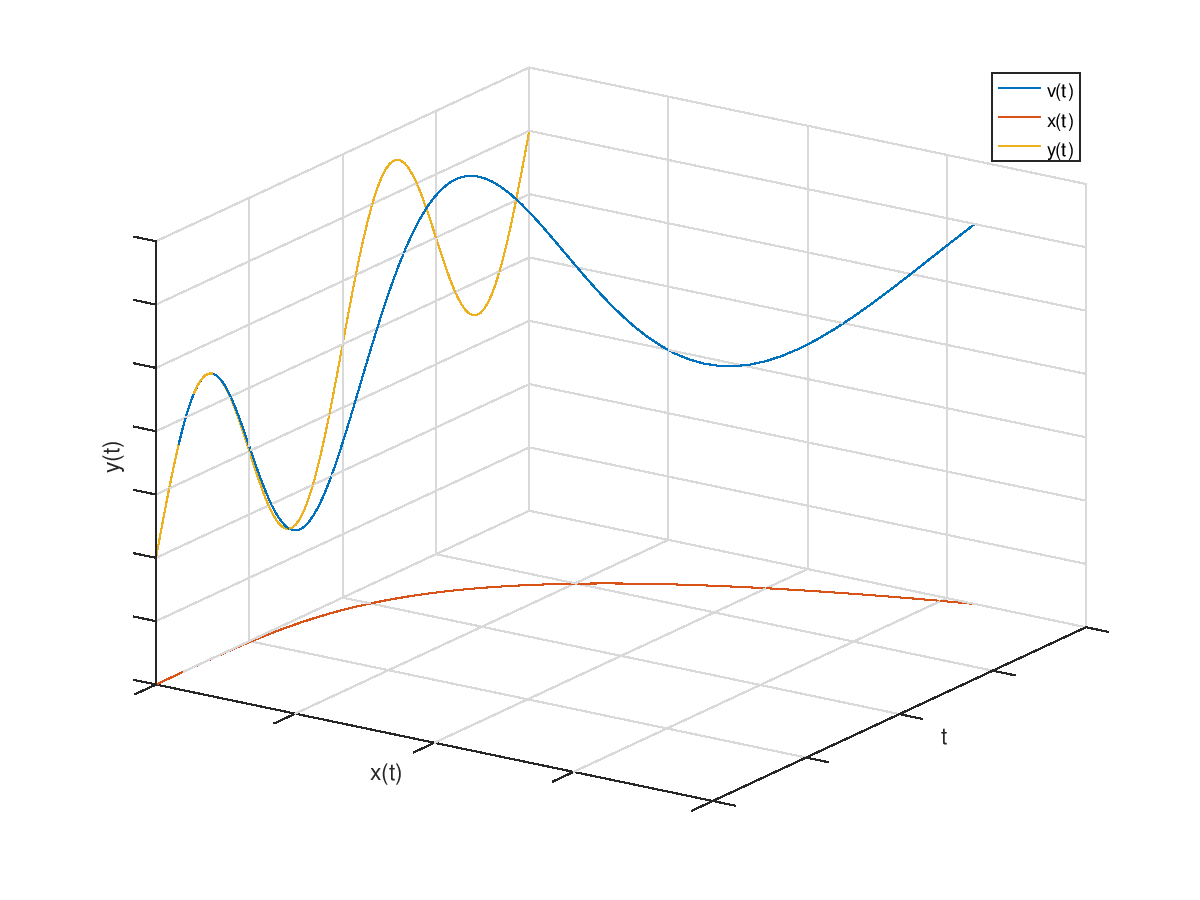 Another way to define the integral of v would be to take the integral of the norms ||v(t)||, but I guess component-wise integrals have more respect for structure and thus have nicer algebraic properties.

(Illustration produced thanks to Octave and this script.)

Not the answer you're looking for? Browse other questions tagged integration measure-theory intuition big-picture or ask your own question.