How can I calculate the position of pantograph's tip from the angles at its base?

Suppose I have a pantograph, as illustrated below.

The base is fixed in that it doesn't move around in space, but arms a and b are able to rotate freely around it, thus moving the tip around according to the angle of a and b from the vertical.

Is there an equation that will describe the x/y position of the tip, given the angles of the arms a and b relative to the vertical, and vice-versa?

If it makes it easier to use angles relative to the horizontal, or something else, that's also fine.

And if this isn't actually an example of a pantograph but is something else, please feel free to edit the question. 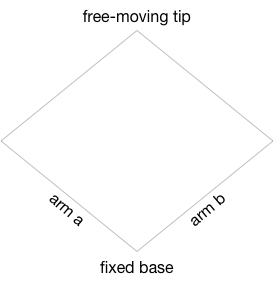 Assuming that this contraption will always assume the shape of a rhombus, we have that the line connecting the tip to the fixed base will always bisect the angle between the two arms, and also bisect the line segment connecting the tips of the two arms. You can use this to draw a right triangle from the middle of said line segment to the fixed base to the end of either arm.

2
How do I calculate the relationship between the position of the vertex of a pentagon and two of its inner angles?
0
How can I adjust a pantograph equation to account for an offset tip?

1
How to calculate the range of angles at which a line will intersect a growing circle? Arc length?
1
3D rotation of an object with respect to another object's rotation
0
Relative point distance to sign
1
Determining the position of a polygon inside a circle from only the angle of opposing sides/edges.
1
moving pipe around corner
0
Deriving Hanging Plotter Position From Two Points At Known Seperation
0
Trying to prove corresponding angles are equal in case of parallel lines
0
How can I adjust a pantograph equation to account for an offset tip?