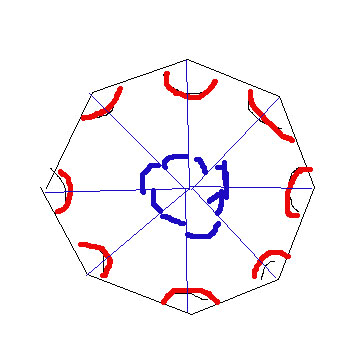 The interior angles on a polygon are the RED angles in the diagram. The sum of these approach infinity. They do not exist in a circle.

The central angles are the BLUE angles. They are always $360$

Actually when you calculate the interior (red) angles of a polygon and they are $180(n−2)=360$... well the $180*(-2)$ represent the blue angles. You don't count the in calculating the red angles so you subtract them. But in doing the circle they are the only thing you do.

As the comment said, it’s hard to define what is meant by “the sum of the interior angles of a circle”. You might define it to mean the limit of this same sum for $n$-sided polygons. But then its value is infinite, not 360 degrees.

Things make more sense if we think of exterior angles. At a vertex of a polygon, the exterior angle is the angle you turn through as you move from one polygon edge to the next one. So the sum of these angles is 360 degrees. Of course, traveling around a circle gives you this same total turning angle.