Define an s-tile as a path of squares that makes two turns in opposite directions.

My take: there is the tiling that just leaves $999 \cdot 2$ squares alone, where the leftmost and rightmost edges of the grid are not tiled except for one square on them. I doubt that this is optimal, and I have no clue how to find an optimal tiling.

Here's a scalable tiling of a $5n \times 5n$ square with S-tiles that only misses two squares (given as an example for $n = 7$): 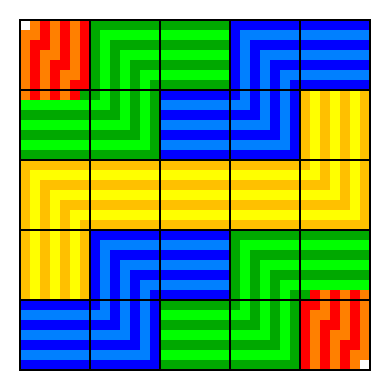 Choose $n = 200$ to get a solution for the original problem.

It is not possible to miss less than 2 grid squares. To prove this, I first need a definition: 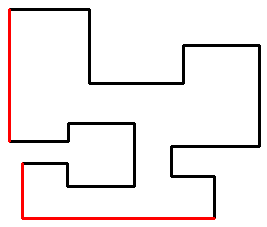 Claim: For any critical edge $e$ of a polyomino $P$, it is impossible to place disjoint S-shapes inside $P$ such that all grid squares adjacent to $e$ are covered.

Back to the original $1000\times 1000$ grid problem: Each of the grid's four edges is critical, so for any placement of S-shapes into the grid there must be some square by every edge that is not covered. Each grid square touches at most two edges, so we need at least two uncovered grid squares in any possible placement of S-shapes into the grid. $\square$

Edit: Here's another, very flexible method to tile arbitrary rectangles. You can choose the widths of yellow strips arbitrarily as long as two adjacent yellow strips aren't too wide. 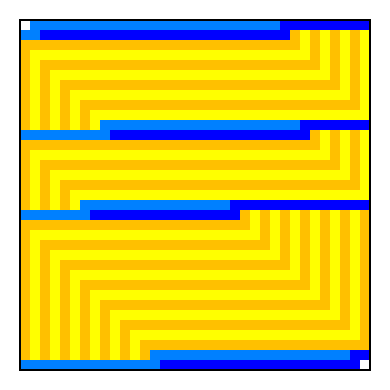 Piggybacking off of Misha's answer, it is possible to cover an $n\times n$ grid with only four uncovered tiles:

Furthermore, I am pretty certain that every edge in a partially s-tiled grid must have an uncovered tile, so that at least two tiles must be uncovered, meaning the optimal number is between $2$ and $4$.

As a starting point, we can definitely cover all but $8$ squares.

To begin with, in any $n \times (n+1)$ rectangle, we can cover all squares except two opposite corners. Use the following scheme (each letter corresponds to one tile):

Not the answer you're looking for? Browse other questions tagged combinatorics discrete-mathematics optimization puzzle tiling or ask your own question.