This is somewhat of a computational question: let me know if it is inappropriate.

I have a flat torus with sone random points marked.

I would like to compute a triangulation of said torus such that my points are the vertexes of the triangulation.

A bit of googling has not given me any results. My naive idea would be to start from the fully connected graph, and every time two edges cross, simply remove one of them. Unfortunately this looks like it's going to be quite expensive, as I have $n^2$ edges each of which can potentially intersect all of the others. I also looked into the Delauney triangulation, but I am not sure it would work on an generic torus, and moreover I have no idea on how to implement it successfully. It also seems rather overkill, since I do not need my triangulation to have any special property.

Is there a simple, greedy way to get a triangulation in non-prohibitive time?

It is possible to construct a triangulation of $n$ points on the flat torus in $O(n)$ time by "brute force" as follows, at least if the points are in general position. I'll assume we're working on the square flat torus, obtained by identifying opposite sides of an axis-aligned unit square.

After both these phases, we have triangulated the points on the square flat cylinder obtained by identifying the left and right sides of the unit square. The top and bottom edges of this triangulation are closed horizontal geodesics, passing through the "highest" point $a$ and the lowest point $z$. To complete the toroidal triangulation, we can extend two diagonals upward from $a$ to $z$. 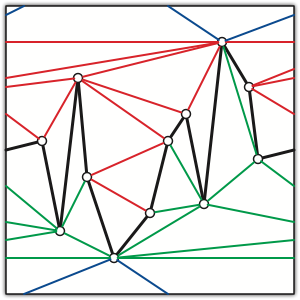 The flat torus can be constucted by identifying the opposite sides of a square in the plane.

You can generalize this for the $n$-torus which can be constructed by identifying opposite face of a parallepiped, triangulate each face such that no point is identifyied in the quotient and draw a segment between a point in the center and the vertices of the triangulation on the faces.

Not the answer you're looking for? Browse other questions tagged computer-science triangulation or ask your own question.