I am trying to understand chapter 4 in John M. Howie's book called "Fields and Galois Theory" (published by Springer). In chapter 4 regarding geometric constructions he gives the following definition:

Let $B_0$be a set of points in the plane. There are two permitted operations on the points of $B_0$:

Phew, that was long. Notice, here the points $O$ and $I$ are the origon and unit, and we may choose any two points of our initial set to be these. Now, I have attempted a bisection of an angle $PQR$, which I have illustrated in the picture below. 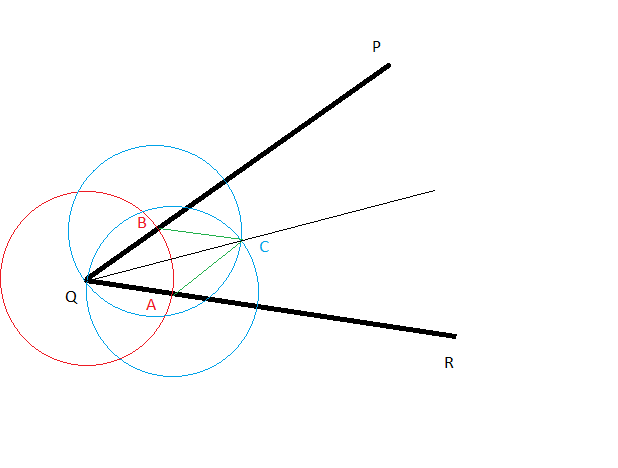 I tried to convert this bisection to the definition given above. As I see it I need atleast three points in my initial set $B_0$ for this. For example, I can find a bisecting line with $B_0 = \lbrace Q, B, A \rbrace$ ($O$ and $I$ would of course be two of these points). If I, however, try with just two, I can not. For example, suppose $B_0 = \lbrace Q, A \rbrace$. I can construct the red circle which has point $B$ on its exterior. However, to construct $B$ it must be an intersection point of my red circle and some other circle or line, given the definition. But to construct a line passing through $B$, I need atleast one more point.

1) Is the point $C$ in the illustration therefore not constructible, if we follow the definition given by Howie?

2) Why is this a sufficient argument? Certainly, you could square a circle given a larger $B_0$ (for the trivial case, $B_0$ could include $\pi$).

I hope this was not too long to devour. Thank you very much for your patience!

Not the answer you're looking for? Browse other questions tagged galois-theory extension-field geometric-construction or ask your own question.