The question can be solved by considering the fundamental group of $S^1$, now I am wondering if we can solve it by real-analysis.

Here is the topological solution:

which leads to contradiction.

The rest of this post will be showing the equivalence of Proposition 1 and the Borsuk Ulam theorem. The following proposition will be used in the proof of both implications.

Remark: For the definitions of $T$, $E$ and $D^2$, refer to Proposition 1 and the Borsuk Ulam theorem.

If you want, you can ask in the comments for an explicit proof of this proposition. However, the proof will be very tedious and not very enlightening at all. The reader is advised to draw pictures of the situation and convince themselves that such a homeomorphism really exists.

By the given properties of $f$ we can apply Tucker's lemma. We find adjacent vertices $v,w\in D^2$ with opposite colors. Because of our choice in triangulation, we find $\|f(v)-f(w)\|<\varepsilon$. Then because of our way of coloring the vertices, we see that both coordinates of both $f(v)$ and $f(w)$ must be absolutely smaller than $\varepsilon$, so in particular $\|f(v)\|<2\varepsilon$.

Since my math is a bit rusty, I do my best. Feel free to correct and/or criticise.

We know the following:

The following figures show a couple of such contours for a set of functions:

A few cases I can imagine, are presented in the next figure: 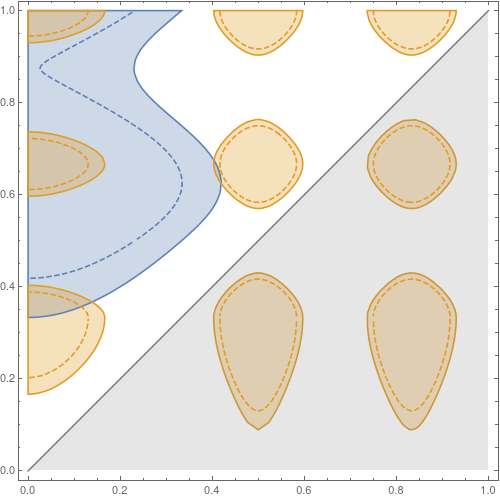 OP's problem can be slightly generalized as follows:

Not the answer you're looking for? Browse other questions tagged real-analysis algebraic-topology or ask your own question.

3
What is a loop in $\mathbb RP^n$
0
Deformation retract - Example and theory question
1
How do I show that this map is path homotopic to a constant map?
2
simply connected covering of a path connected space (II)
0
Unit sphere without a point is contractible
0
Self-homeomorphism of punctured unit disk which induces identity-automorphism of fundamental group
3
Retraction of a Moebius strip
5
Showing fundamental group of a particular space is trivial.
1
constructing homotopy