If I am interested in the solution for only one of the unknowns, what are the best approaches?

There is a way to reduce the complexity and make the system solvable in parallel. It is called Diakoptics (a method invented by Gabriel Kron). The methods primary use is for large electrical networks that have few interconnections like power grids. But you should be able to adapt it.

Lets assume you have a $N \times N$ system, lets say you can divide the system into two systems with 1 connection point(plus reference when you look at electrical systems). The connection points are $m$ and $n$. Lets assume these systems are of the size $N_1=N/2$ and $N_2=N/2$ (for simplicitys sake). You should now solve them separately.

I'm more used to the engineering notation with $Z, I, U$ and so on, so excuse for non-standard symbol usage.

The Wikipedia page https://en.wikipedia.org/wiki/Matrix_multiplication_algorithm#Sub-cubic_algorithms shows how the fast known asymptotic algorithm has evolved through time: 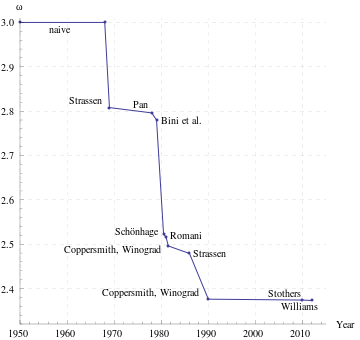 This begs the question: how close can we get to O(n^2), which is of course a lower bound since we have to read 2 * n^2 inputs at least once?

Proving the upper lower bound, even non constructively, would make you instantly famous. Wikipedia lists it as an "Unsolved problem in computer science".

The constant factor for the better algorithms is so large though that it makes them impractical for most matrix sizes found in practice today, and I doubt this will change if new algorithms are found.

Therefore any practical real world answer will come down to optimizing against a given machine model, which is an important software / hardware engineering optimization question, but not of much mathematical interest.

Personal guess about solving for single variables: I don't think you can reduce complexity like that in general, since the entire system is coupled. How would you know that your solution for some variables also satisfies the entire global solution?

Unless your matrix is sparse or structured (e.g. Vandermonde, Hankel, or those other named matrix families that admit a fast solution method), there is not much hope of doing things better than $O(n^3)$ effort. Even if one were to restrict himself to solving for just one of the 50,000 variables, Cramer will demand computing two determinants for your answer, and the effort for computing a determinant is at least as much as decomposing/inverting a matrix to begin with.

Im suggesting you take a look into what quantum computing can do for you.

If you are able to make api calls form your product - then this might be the most performant approach by a lot.

This youtube video for example is a lecture which discusses problems that appear with large nr of equations : Quantum algorithm for solving linear equations

For quantum computer api you can use a service like: http://rigetti.com/forest

I personally did not tested this services, but this answer is just for pointing out the posibility. Just to show is something that can be used today, not science fiction.

Not the answer you're looking for? Browse other questions tagged linear-algebra systems-of-equations numerical-linear-algebra or ask your own question.

2
what is the fastest way to solve equations having more than two variables of 1 degree?
0
Solving Nash equilibrium