Does this type of tripartite graph formed from two $K_{2,4}$'s have a name? 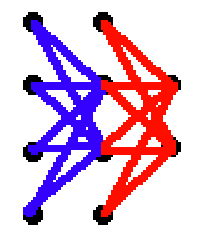 I used red and blue just because when I used blue both times, it might look like some of the leftmost vertices are connected to some of the rightmost ones, which isn't the case.

Do such graphs have a name such as $K_{4,2/4,2}$ or something?
The graph is definitely not random, there's a simple formula to make such a graph.

Browse other questions tagged graph-theory terminology bipartite-graphs neural-networks or ask your own question.

4
Does this kind of graph formed from a linear collection of bipartite subgraphs have a name?

6
When does a biregular graph for the free product 2∗(2×2) have a 4 cycle?
5
What is the name of a graph made of k copies of a 4-cycle connected end to end in a chain, possibly with leaves?
0
Proof Verification: Two problems from Elementary Graph Theory
1
When is a graph which is a combination of two graphs connected
1
Is there a name for Chain of complete bipartite graphs?
5
Find shortest path in undirected complete n-partite graph that visits each partition exactly once