What does the mysterious constant marked by C on a slide rule indicate?

Years ago, before everyone (or anyone) had electronic calculators, I had a pocket slide rule which I used in secondary school until the first TI-30 cane out.

Recently I dug it out. Here's a photo of one end of it. 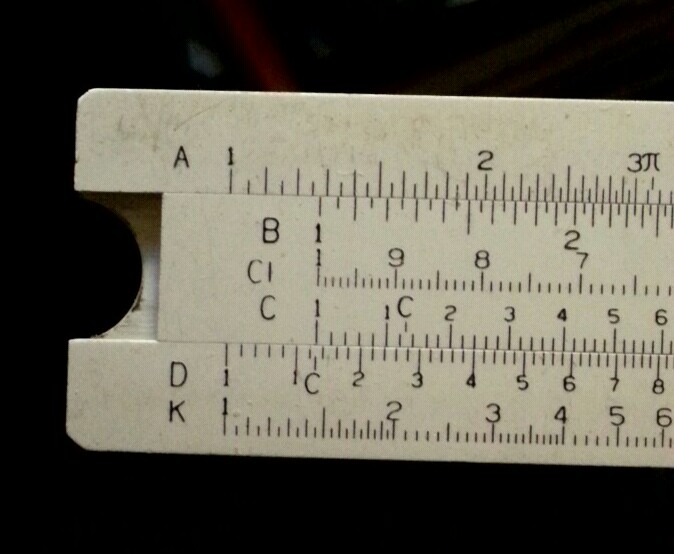 The only two special numbers marked are $C$ and $\pi$.

I'm not sure whether it's some frequently used constant that's used (eg) in some branch of engineering, or a number which is useful for some trick for using the slide rule.

Unlike $\pi$, which is marked on most of the scales, this mysterious $C$ only appears on the C and D scales, which are the main ones used for multiplication and division.

If you need me to, I can give more explanation of the various scales on the rule and how calculations are done. That might give some clues as to what $C$ is for.

I'm sure the instructions explained what $C$ was, but I last saw those in the 1970s.

Has anyone any idea what $C$ is and why it would be useful on a slide rule?

I found the answer by googling "slide rule markings"! It took me straight to the Glossary of the International Slide Rule Museum, which gives C its own entry:

C - Gauge mark found on the C and D scales denoting $\sqrt{4/\pi} = 1.128$ for calculating the area of a circle and the volume of a cylinder. Place the C mark on the C scale over the diameter of a circle on the D scale. The area of the circle is found above the index on the A scale. If this is the base of a cylinder, without moving the slide, move the cursor to the height of the cylinder on the B scale. The volume is read on the A scale. This gauge mark was rendered obsolete with the advent of multi-lined cursors.

And there is, of course, so much more at that site.

Not the answer you're looking for? Browse other questions tagged notation math-history constants or ask your own question.

9
Is there an established notation, either modern or historical, for any unit of measure which is then further subdivided into 360 degrees or parts?
1
Looking for in depth material on a formal propositional calculus using only the NAND connective
2
Have humans ever used the Log Scale convention in the past rather than the Linear one?
9
How are Trott constants found; are there mathematical results?
33
What does the symbol nabla indicate?
1
What does $\min\sum\dots$ indicate?