For a optimisation task I'm facing a problem that my limited geometrical knowledge can't solve. I have a cloud of points in a 2d plane, where I want to perform some binary metric on to select a threshold of x and y where some rules are maximized. I performed regression on the points to found a line (r^2 0.89).

visually this is the data https://ibb.co/Smg0tpQ I want to draw a parabola that passes through the red dots and that has the vertex on the line. By doing intersect of three points the vertex is not on the line. I tried with a system with f(point1), f(point2) and then the third one in vertex form but as I need to do it programmatically it got very messy. I would like to have some theoretical insights about how to tackle this problem algorithmically

Once you’ve nailed down the vertex of a parabola, there are two degrees of freedom left (e.g., axis direction and scale factor, focus location, &c). The two other known points provide additional constraints that can be used to determine the values of the remaining parameters. Unfortunately, it appears that doing so unavoidably leads to having to solve a cubic equation. Of the methods that I’ve tried, the following leads to probably the “nicest” cubic.

The good news is that there’s an algorithm for solving equations of this form of cubic, so it can be automated even if you don’t have access to an equation solver. You can find this algorithm in J. Richter-Gebert's Perspectives on Projective Geometry section 11.4 as part of a method of intersecting two conics. The not-so-good news for your application is that for some configurations the solution set consists of two (points are colinear) or three distinct lines through the origin instead of one—the parabola is not unique. If you want to show a smooth progression of parabolas as the vertex moves along the line, you’ll have to do a bit of extra work to choose the appropriate solution of the three. It might be possible, for instance, to parameterize the moving vertex and use the same parameter for family of parabolas generated by it given the fixed pair of other points through which the parabolas should go.

Here’s a plot from Mathematica approximating your diagram, and the parabolas that result from some equally-spaced vertices along the line. 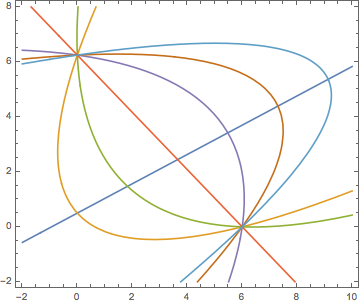 I’ve also put together a little GeoGebra demo that you can play with to see this solution in action.

You mention in a comment that you don’t necessarily need a parabola for your application. Working up a smoothly-varying family of hyperbolas might be a bit easier than the above, but with a hyperbola you’ve got an extra degree of freedom, so you’ll have to make some additional choices for each one as compared to computing these parabolas.

Addendum: The number of real solutions of the single-varible cubic equation $ax^3+bx^2+cx+d=0$ with real coefficients can be determined by examining its discriminant $$\Delta = 18abcd-4b^3d+b^2c^2-4ac^3-27a^2d^2.$$ If $\Delta\gt0$, then the equation has three distinct real roots; if $\Delta=0$, then there is a multiple root and all roots are real; if $\Delta\lt0$, there is only one real root. We want a non-trivial solution to equation (3), so we can divide through by whichever of $c$ or $s$ is nonzero to convert that equation into a single-variable cubic equation and then compute $\Delta$ to determine whether or not we will need to deal with multiple solutions to (3). Observe that the formula for $\Delta$ is the same if we swap $a$ with $d$ and $b$ with $c$, so we don’t actually need to worry about either $c$ or $s$ being zero: the discriminant is the same for both of the single-variable equations that might result. Computing the discriminant of (3) yields a rather complicated expression that has a factor of $(x_1y2-x_2y_1)^2$, so the equation has a repeated real root when the three points are colinear (as noted earlier). This term is positive for other configurations, so the number of roots depends on the remaining term, but I’ve gained no geometric insight from looking at it.

Not the answer you're looking for? Browse other questions tagged conic-sections python or ask your own question.