How does one generalize the dual of a tiling by regular polygons to other tilings?

This question is motivated by some work in curriculum design for outreach math. Normal tilings of the Euclidean plane are popular since people of all ages can play with them, but on the other hand the topic can be quite subtle and complicated. This sets up a situation where common abuse of terminology sometimes snowballs into broader confusion. I'm trying to remedy that and, at least for a start, improve my own understanding of the technical details so I can explain it to educators. This boils down (for now) to two questions, the more interesting one being in the title. I start with the less interesting one though because it sets up notation.

Online, one can easily find a tessellation "defined" as a "tiling of the plane" or the like, and it's usually not worth the work in clearing up all the abuses of terminology in such statements. My gut tells me that people just like the more math-y sounding (and less bathroom-reminiscent) word, and it bugs me a little because I want people to be willing to think about more advanced stuff if they want to throw around bigger words. However, trying to choose my battles wisely, I wonder if there's an easier way out without sacrificing consistency. Is there an area of math with a respectable set of references where this usage is consistent?

The dual of a tiling can be defined combinatorially as the result of interchanging its vertices and faces (once those have been properly defined), and in this sense, is an topological invariant. However, I find that people want to think of this as a geometric process, with the "dual" drawn in a specific way. Sometimes that makes sense and other times it does not. (Warning: abuse of notation imminent.)

Let's restrict to the case where $\mathcal{X}$ is the Euclidean plane. If all my $T_i$ are regular polygons, then my colleagues want to say that $\mathcal{T}$ has a "dual" tiling, $\mathcal{T}^*$, formed by putting a straight line segment connecting the centers of every pair of adjacent (edge-sharing) tiles, then erasing the original edges. We notice that $\mathcal{T}^{**}=\mathcal{T}$, as desired.

The trouble arrises when folks want to talk about "duals" of tilings not consisting of regular polygons, which gets vague because it's unclear what the center is, especially when the tiles are concave. Also, you have scenarios where $\mathcal{T}^{**}\neq\mathcal{T}$, which does not seem right for something we're going to call a "dual."

On the other hand, one does gain insight from doing something like the dual construction on other shapes. By way of motivation, check out what happens if $\mathcal{T}$ is Escher's famous lizard tiling, then I form a "$\mathcal{T}^*$" where I pick an eyeball to use as my center, and follow that eyeball consistent with the symmetry. This choice is to (1) show what happens if my point is clearly not in the geometric center, and (2) make it easy to find on every lizard. 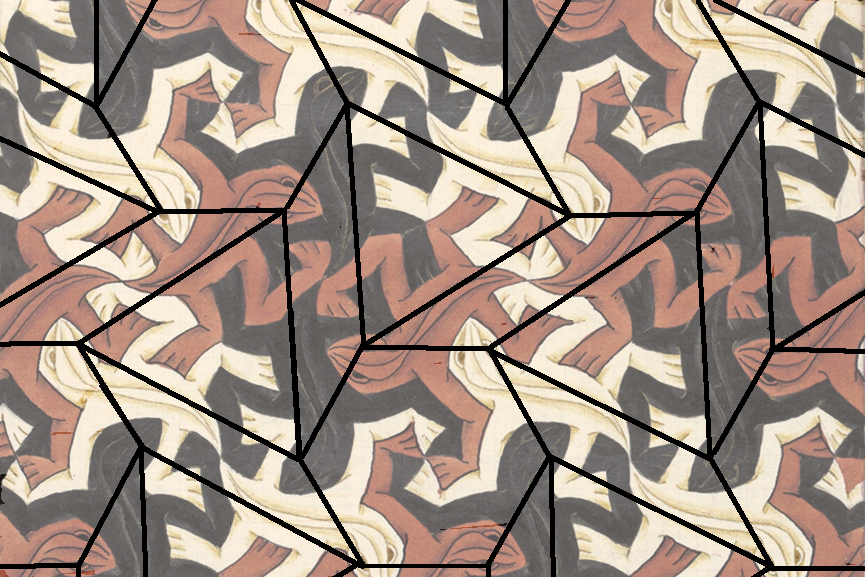 And look what happens when I form "$\mathcal{T}^{**}$" using the geometric centers of the new polygons, which just so happen to be vertices (ie, points of valence $>2$) of the original Escher tilings (doesn't seem like a coincidence). 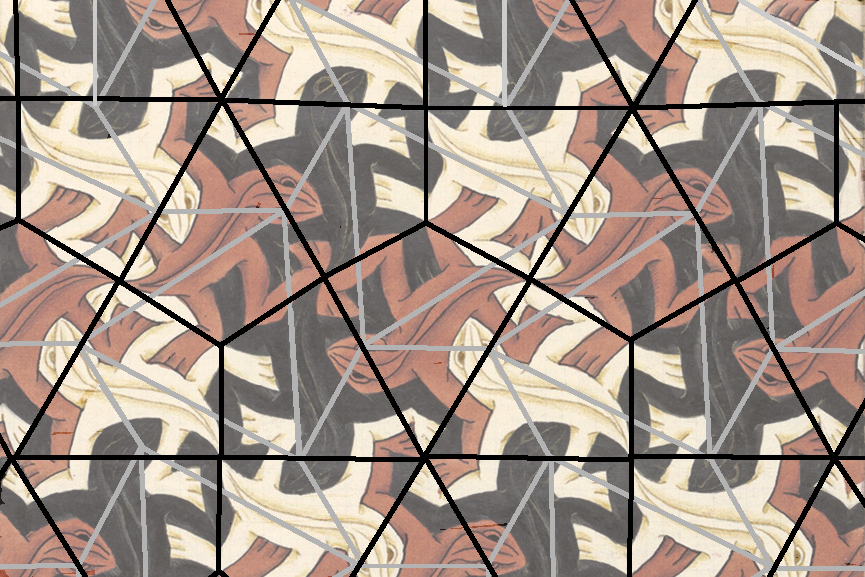 Does that monohedral pattern with quadrilaterals tell me things about the symmetry of the lizard pattern? You bet. And if I don't mind using where those eyeballs were as my "centers" again, I also get "$\mathcal{T}^{***}"="\mathcal{T}^{*}$". But did I take a "geometric dual?" What did I take? Is there a more generalized theory of this and, if so, what are the rules?

In a way, any such periodic tiling of the Euclidean plane lives on a torus of some kind $(\mathbb{R}\oplus \mathbb{R})/(\mathbb{Z} \oplus \mathbb{Z}) \simeq S^1 \oplus S^1$ however, within those there is much variations. Once you have a partition of the Euclidean plane into convex polygons there's a dual tiling construction, for examply by connecting the centroids of each polygon. 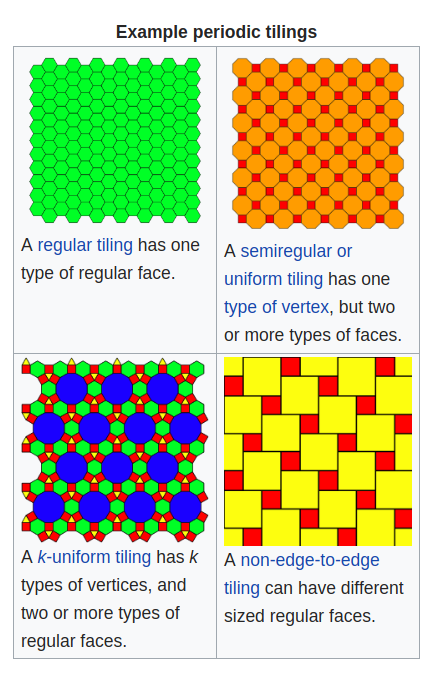 The Wikipedia article on Regular Tesselations of the Euclidean plane, classifies them by Orbifold symbol. So there are two dual tilings with orbifold symbol *632 (triangle $\leftrightarrow$ hexagon) *442. 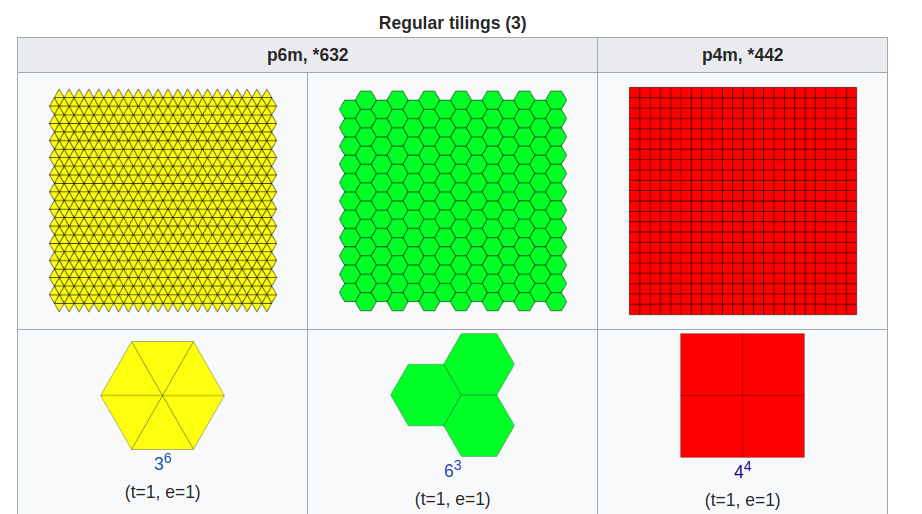 These uniform tilings and colorings have many dualities.

I've seen two ideas similar to this used with quasiperiodic tilings. Nicholas De Bruijn described a construction called "pentagrids" or "multigrids", a set of lines whose intersections correspond to individual polygons in a Penrose tiling (or some other rhombus tiling). This is a sort of dual: to go from pentagrid to tiling, you rotate each line segment by 90 degrees, then reconnect so that the edges which formerly met at a vertex, now define the boundary of a new polygon. This preserves the angles and symmetry of the original tiling, but does not preserve distances. But it shows that in some cases at least, it is possible to define duality without reference to the center of the polygon.

This seems related to a concept called "mutual local derivability" that I've seen used on the Tilings Encyclopedia, which describes how two tilings can be transformed uniquely into each other via local rules. I haven't really done any background reading on this yet, so I will just drop a link to their definition: https://tilings.math.uni-bielefeld.de/glossary/mld/

Also, the markings you use remind me of what I've seen referred to as "Ammann Bars" or "Ammann Lines", a way of marking up tiles with lines such that the lines enforce quasiperiodic matching rules. I don't know if these have the 1:1 relationship that duals do, but they certainly can be used to describe or illuminate certain symmetrical aspects of a tiling. This article talks about Ammann bars in some depth-- if you're a visual thinker like me, the illustrations start on p.27: https://arxiv.org/pdf/1608.08215.pdf

Not the answer you're looking for? Browse other questions tagged duality-theorems tiling tessellations or ask your own question.

24
how to generate tessellation cells using the Poincare disk model?
3
Not understanding this proof in Grünbaum-Shephard's Tilings and Patterns
1
What does "uniqueness of composition" mean here? (Grünbaum-Shephard's Tilings and Patterns)
11
If you know that a shape tiles the plane, does it also tile other surfaces?
3
Shapes for tiling a circular disk?
1
Is it possible to tile the pane with a semi-regular tesselation given only the vertex type?
3
Polyhedra that cover the sphere more than once