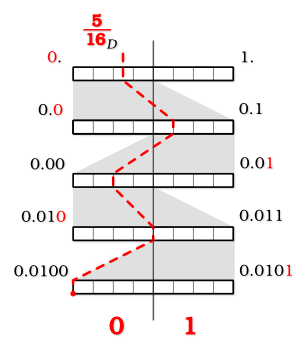 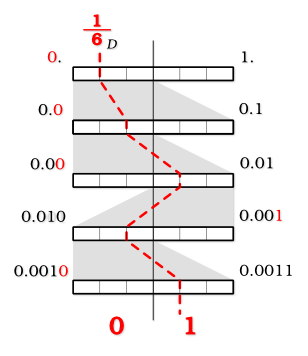 Fixed-Point: One integer holds the "integer part"; another holds the "fractional part". This is simple to store and display, and has very high magnitude and precision with virtually no error, but doing real math with the numbers involved can get hairy. Decimal numbers aren't often seen in this form, but it is a possibility.

Maintained Floating Point: a large integer holds the entire value, and a second smaller number maintains the relative place of the decimal point from the right (or left) side of the number. Much easier to manipulate for mathematical operations, same maintenance of precision, zero error, and used in many implementations of "BigDecimal" object types where the "built-in" floating point mechanisms aren't available. Can be more difficult to represent in base-10 form on-screen. If implemented with normal integer types, this method can be more limited in magnitude than the previous one; instead, many implementations use a byte array to store the number, allowing the numbers to be as big as system memory allows.

Implicit Floating Point: The number is expressed in what amounts to "binary scientific notation". A "mantissa" is stored as an integer, with the decimal point implied to be on the far right. Then the exponent of a power of two is also stored. The actual value of this number is the mantissa, multiplied by two to the power of the exponent. This approach allows for the storage and calculation of truly massive numbers, and modern CPUs are designed with a Floating-Point Unit or FPU (sometimes called a "math co-processor", in the early days of its integration into 486-class CPUs) that accelerates calculations of numbers in this form. However, there are two problems; first, there's a tradeoff between extreme precision and extreme magnitude; the mantissa, and thus the number of digits that can be stored precisely, is fixed, so as magnitude increases, the number of possible decimal places decreases (in the extremes of magnitude you often can't get more granular than the millions place). Second, there's an amount of "rounding error" inherent in using floating-point numbers, with the inherent conversion to binary and back; this can cause errors in calculations requiring exact precision (such as when dealing with money), and so unless the extreme magnitude of a floating-point type is required, it's generally recommended to use a method of representation that does not introduce error.

Binary long division is a bit longer than decimal long division since you need more digits to write each number, but finding the largest multiple of your divisor that will fit is pretty trivial when it's either 0 or 1 times.

Not sure how helpful this is but whenever I work with binary I always use a table.

Not the answer you're looking for? Browse other questions tagged number-systems binary or ask your own question.

2
What is 6.5 in binary?
20
Converting decimal(base 10) numbers to binary by repeatedly dividing by 2
23
How to Garner Mathematical Intuition
9
What is the standardized way to represent $\pi$ in binary notation?
2
Request for apps for Mathematical Drawing
1
Convert numbers from one base to another using repeated divisions.
1
Constructing a 4-edge connected graph that is 2-connected but not 3-connected

13
Why do we divide or multiply by 2 when converting binary?
1
Converting decimal fractions to binary
1
Converting a negative decimal with fractions to binary and hex
4
Proof that a block of digits doesn't repeat twice in a row in an irrational number in binary
1
Signed Magnitude Binary number to Hexadecimal
2
Can decimal be represented in binary?
0
Binary prime numbers: grammar
0
How to convert decimal with fraction to a binary