I'm looking at this picture on wikipedia, comparing the median and mean of an arbitrary distribution. But what does it mean exactly? From the figure, it looks like the mean is the center of mass of the distribution (in the sense that you could balance the distribution on that point). However, since the median has $50\%$ to its left and right, it seems a more reasonable candidate for the center of mass. Which one is it? And what is the geometric interpretation of the other metric? 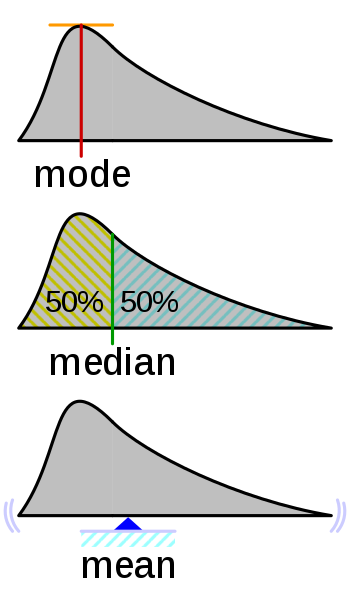 The median is the point that splits a set into two equal subsets. The mean is the average of all elements in the set. Both are measures of center, but the mean is more sensitive to the extreme values (i.e., outliers).

The image is not clear. The prob dist has 50% of its values by quantity to the left of the median, and 50% to the right. Each value is put in ascending order and is counted once in computing the median, no matter its value. The dist has 50% of its mass/"area under the curve" to the left of the mean. This is a quick computation using the formula for expected value (technically the discrete and continuous cases are slightly different but the idea is the same).

Not the answer you're looking for? Browse other questions tagged statistics means median or ask your own question.

3
Upper and lower bound for variance given mean and median
0
Ratios of median/mean and standard deviation/IQR in a normal distribution
1
median and mean of the sample mean of i.i.d. log-normal
5
What is the equivalent of "centre of mass" or "centre of gravity" for medians?
9
Median is twice the mean
0
Closed expression and physical interpretation of the median