A $7 \times 7$ square puzzle may be described as following.

Start with a $7 \times 7$ square divided into $7 \cdot 7$ unit squares. First select a unit square and mark it. And then, in each subsequent step duplicate the current marked squares by translating them onto a set of unmarked squares; mark the new squares so that the number of squares marked is doubled at each step. Determine the maximum number of squares marked repeating this process.

The answer is, amazingly, $32$. I do not include the solution for users pleasure. This puzzle is due to M. Rosenfeld. He wrote in his paper titled 'A "simple" rectangular puzzle'(2007), that

Many mathematicians tried to solve the $7 \times 7$ square puzzle. Some succeeded others did not. Stan Wagon showed Raphael Robinson the puzzle. Raphael contacted me and told me that he solved it while taking a bath. He was wondering why some people had difficulties solving the puzzle. He discovered that if you make a wrong selection in the initial step then it will be impossible to mark 32 squares on the 7×7 square. He sent me a sketch of a very nice proof showing that the final shape of the 32 marked squares is unique (modulo rotations by 90, 180, 270 degrees). The pattern is ($\cdots$ ommited $\cdots$). I hope to publish the proof in the near future.

And as far as I know, he never published the proof. I have tried to prove the uniqueness of the final configuration for several hours in vain. So my question is the following.

The Question Prove that the final configuration of the $7\times 7$ square puzzle with maximum number of marked squares is unique up to rotations and reflections.

Edit: As pointed by @hardmath, the problem has introduced Rosenfeld's article titled 'a dynamic puzzle.'(1991) For the links to the paper quoted and mentioned, see the comment below by hardmath.

I have an answer of how to reach $32$, but I can't prove uniqueness. But I figure it might help other people (especially to confirm uniqueness). See the spoiler if you want to know how to get $32$.

We will show that $32$ squares are mark-able and the final state is essentially unique. Let $T=\left\{ v_j| j=1,2,3,4,5 \right\}$ be the corresponding translating vectors. We choose orientation so that the right and upward directions are positive. For example, in the following figure, the black square indicates the initial position. For each translation, mark red the corresponding square to the black square. Then the vectors are obtained by reading the relative positions of red squares with respect to the black square. So the vectors are $(0,1)$, $(1,-1)$, $(1,1)$, $(1,3)$, $(3,0)$. Each square corresponds to the linear combination of those vectors with coefficients $0$ or $1$. 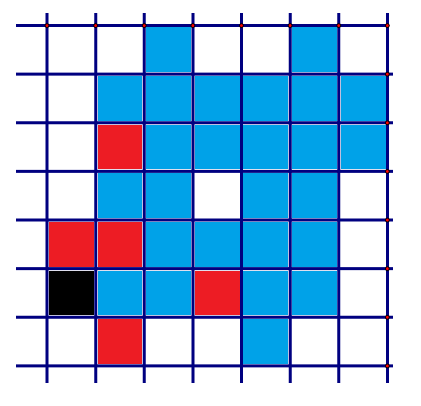 The set of translation vectors $T$ with the properties is unique up to the action of changing signs of some of members of $T$ and changing all the signs of $x$-components. 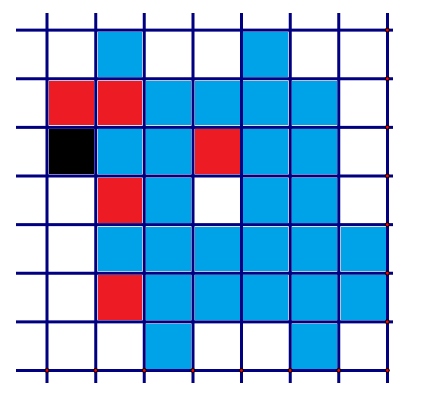 Not the answer you're looking for? Browse other questions tagged combinatorics discrete-mathematics puzzle discrete-geometry tiling or ask your own question.