As the title implies, It is seems that $e^x$ is the only function whoes derivative is the same as itself.

We know, the more bacteria exist in a colony, the faster the colony will grow. More precisely: The growth speed of the colony $B$ is proportional to it's size ... Double size, double speed.

Furthermore we know the growth is exponential, since bacteria clone themselves in fixed amounts of time, i.e.

Putting it together, we can deduce that:

We simply call that base $e$. Having such an $e$ is quite useful. We could use its special derivation traits we found above to define all exponential functions to the base $e$.

This shows that the factor $c$ we encountered in the above equations equals $\ln a = \log_e a$ and therefore, we can easily derive all kinds of exponential terms.

(Looks like Niel and "J" beat me to the punch while I was composing this, but I'll post my answer anyway since I like my diagram. :) )

To reduce symbolic (and mental) clutter for a while, let's write $k$ for $a^c$, to get

The point is that

Multiplying the value of $a^x$ by something yields the same result as adding some other thing to the exponent.

Consider what this bit of algebra tells us about the geometry of the graph of the function $y=a^x$ (shown in red in the figure below). Recall some fundamental notions:

The Law of Exponents tells us that (provided $k$ and $c$ are related appropriately), these transformed graphs are identical! In the figure, the blue graph represents both results.[*] Importantly, what points move where aren't the same under both actions; scaling moves the red point $P$ vertically onto the blue point $Q$; translating moves the red point $R$ horizontally onto $Q$. 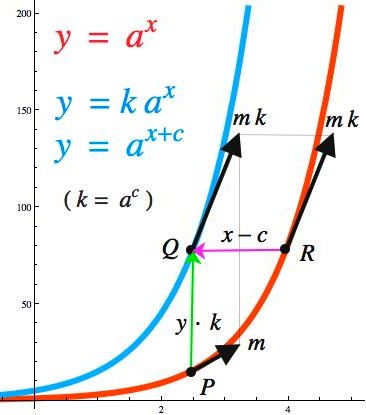 Now, as suggested by the diagram, imagine a tangent vector poking out of each point of the original graph, and consider what the transformations to do those vectors:

What can we conclude here? Why, something pretty remarkable:

Let me take this opportunity to retire $k$, since it is beginning to become clutter; I'll just make the appropriate relationship explicit. Also, I'm going to retire the point name $R$, opting to describe the point instead. I'll summarize things this way:

Notice that there's nothing special about the players in this game. $P$ is any point on the graph, $c$ is any (horizontal) distance you care to choose; heck, even the exact value of $a$ is up for grabs. Let's use this to our advantage.

Observe that we don't even need "$c$" in the above formula, since it's just taking the place of some $x$-coordinate. We can simply write:

From here, it's pretty much a matter of definition to get to the final answer to your specific question. After all, the above holds for any (non-negative) value of $a$. Clearly, some values of $a$ correspond to graphs that cross the $y$-axis very steeply; some values correspond to graphs that cross the $y$-axis very shallowly; it's not un-reasonable to believe that there's a convenient value would cause the graph to cross the $y$-axis juuuuuuuuust right ... with a slope of $1$. Of course (as I mix my folklore), to name a demon is to control him, so we'll simply assign a symbol to this "just right" value of $a$.

Assuming that such a number really does exist, you don't even have to know its exact value to conclude

You can then turn your attention to figuring out why $e$ happens to have the value $2.718...$ . Other answers in this thread provide insights on how those arguments proceed.

[*] As Niel mentions, this illustrates that the graph of an exponential function is "self-similar". I think it's important to add "uni-directionally" to the description, in order to distinguish it from (conventional) similarity transformations where scaling occurs "omni-directionally".

[**] "to the left" works, too, with appropriate changes to the discussion.

If you accept (it's true, but it could take a while to explain why) that this series, like polynomials, can be derived term by term

One conceptual way to understand the standard definition $e^x = \lim_{n\to\infty}(1+x/n)^n$ is to view it as arising from applying Euler's approximation method to $\,y' = y.\,$ The same method also works for arbitrary higher-order constant coefficiant ODEs by converting them to linear system form and employing matrix exponentials. This is described quite nicely in Arnold's beautiful textbook Ordinary differential equations. Here is an excerpt: 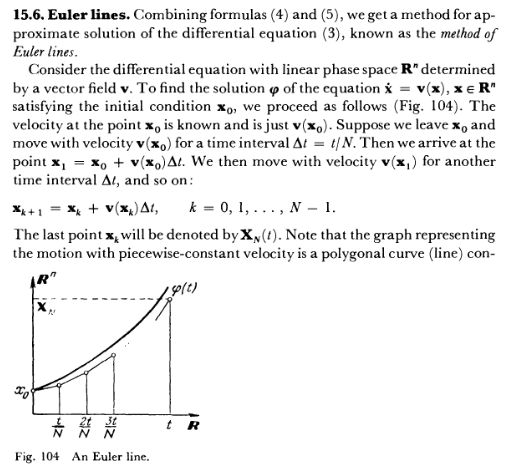 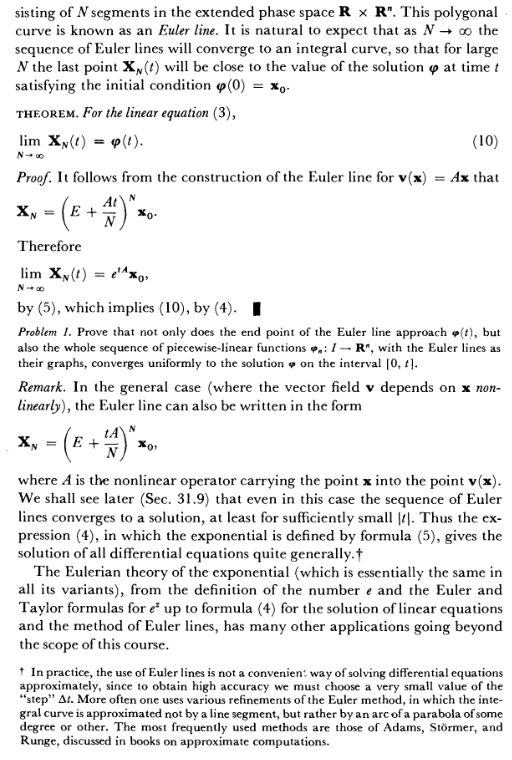 I'll act on Casebash's proposal later, but for now... care for a movie?

(granted, I cheated and spaced the two plots of $\exp(x)$ to clearly show the moving tangent line... but you guys should be able to understand this).

(thanks to Stan Wagon!)

A particle on a trigonometric hyperbola has acceleration described by the same hyperbola.

That is, differentiation is idempotent on the hyperbolic cosine. Since $e^{x} = (\cosh x)^{\prime} + \cosh x$, the claim follows immediately.

One interesting way of looking at this is by turning the differential equation into an integral equation.

Now I am going to guess an answer for y. The simplest function $y(x)$ that I know which goes through $(0,1)$ is $y_0(x)=1$. The subscript here has no special mathematical meaning, it just signifies that this is my first guess.

The integral added a constant that wasn't there before, our guess must have not been very good so we will take this new result as our second guess hoping that it knows more about the problem. So our new guess is,

If we do this a few more times we will get the following,

If you look closely at the coefficients you will see that we are generating the Maclaurin series for $e^x$.

This is happening because the only function which is it's own anti-derivative is the exponential function. In the terminology of dynamics we would say that the infinite series representation of $e^x$ is a fixed point of the integral operator. It is also an attractor which means that repeated integration of $some$ unrelated functions will produce a sequence of functions that approach $e^x$.

There are two components to the original question:

I can give an intuitive answer to the first of these questions, by combining two observations.

Assuming that $y(x)$ admits a Taylor expansion, it will be:

[This is taken from "Mathematics of the Discrete Fourier Transform", by Julius Smith, and anon's answer, possibly others, are also similar. I like the intuitiveness of Smith's presentation though].

Apply the definition of differentiation:

This shows that the function grows exponentially: every time you make a step, you multiply by the same factor $(1+h)$.

In the limit, you recognize the exponential function.

Similarly to the way a vector $x$ can be an eigen-vector of a matrix operator $A$.

By the definition of derivation and the eigenvalue equation $Ax=\lambda x$, recursively one gets a representation (one of the known formulas) of $e^x$

How does this relate to derivation and exponential function. Even more intuitively, derivation decimates the function it acts upon, exponentialy (consider $(x^n)'=nx^{n-1}$), so a function that is unchanged by such exponential decimation, must be exponential itself (eigen-vector)

(to maintain the terminology used above, the function should be exponential to all orders, i.e $e^x$).

In 'simple terms', we can define the ${\large{\rm e}}$ number as the one which makes 'simple' the logarithm derivative:

Intuitively, it's hard. Somebody told me that Euler was tired of the accumulation of logarithm powers when he took successive derivatives of $a^{x}$.

Here's my 2 cents, just look at the def of derivative

now the defining property of ex is that for very small x, ex ~ 1 + x

and since ex + d = exed ~ ex(1+d), it's clear that by plugging everything into the definition of derivative you will get the required result.

When we take $x^n$, and derive it $n$ times, we get $n!$ . So, by that logic, if we'd ever want to construct a function (other than the obvious $f(x) = 0)$ which is immune to derivation (and, by extension, to integration as well, since the two are opposite operations), then that function would have to be $\sum_0^\infty\ x^n/n!$ . Which â€śjust-so-happensâ€ť to be the same as $e^x$ , since the famous number $e$ has been expressly created, designed, and defined to equal exactly $\sum_0^\infty\ 1/n!$ , precisely for this very reason.

Not the answer you're looking for? Browse other questions tagged calculus exponential-function intuition or ask your own question.

7
Intuitively, how do you explain the concept of Flux?
1
Explain why series divergent or convergent
2
Minor flaw in understanding of the proof of the derivative of exponential functions
1
Could someone explain chain rule when it comes to implicit differentiation?
1
Can you explain this counterintuitive conditional expectation result intuitively?
2
Could you please explain this simple general topology theorem?
1
How do you explain intuitively that in split-complex numbers, $0^{\frac12+\frac{j}2}=\frac12-\frac{j}2$ and $0^{\frac12-\frac{j}2}=\frac12+\frac{j}2$?