The Koch curve is normally constructed by taking a line segment, replacing the middle third with two copies of itself forming legs in an equilateral triangle, and then repeating this recursively for every subsegment. See image below. At every step, the length of the curve is multiplied by $4/3$ so the final length is infinite.

Notice that every line segment undergoes the construction of the Cantor set:

Therefore one could consider replacing every line segment with Cantor sets already from the beginning. Thus, start with the Cantor set, take two smaller copies of the Cantor set and make a $\wedge$ in the middle opening, and then repeat recursively. In this case the final length will be zero since the Cantor set has length zero.

Question: How is this paradox resolved? Will the limit set of my construction be different than the ordinary Koch curve? If so, what points are missing?

For example, if $$ Q_n = \{k/n:0\leq k \leq n\}, $$ then the Hausdorff distance between $Q_n$ and the unit interval is less than $1/n$. $Q_n$ is finite, yet the sequence of $Q_n$s converges to a set of positive length. Similarly, you could strengthen your example by using the set of endpoints of the intervals that approximate the Koch curve.

Here is a strategy to find points in the Koch curve that do not lie on any of your Cantor sets. First, note that the Koch curve is invariant set of the iterated function system:

Finally, if we have any other sequence of 1s, 2s, 3s, and 4s, then we generate some other point on the Koch curve that is not in any of your Cantor sets. There are uncountably many such points. I suppose the simplest one to find explicitly corresponds to the sequence containing only 2s, which is exactly the fixed point of $T_2$. To find it, we need only solve $$T_2(x,y) = (x,y),$$ which yields $(5/14,\sqrt{3}/14)$. That point is shown in red in the sequence of approximations below.

If we zoom into the last picture on the red point so that it's centered in a square of side length 0.04, we get the following: 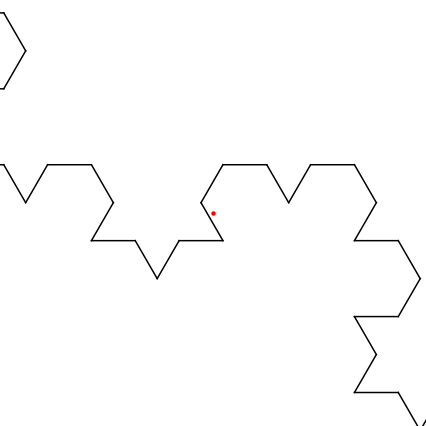 Thus, the edges keep jutting out closer to the point but never actually hit it. It's in the limit but not on any of the edges.

Not the answer you're looking for? Browse other questions tagged fractals paradoxes cantor-set or ask your own question.

826
The staircase paradox, or why $\pi\ne4$
2
Length of diagonal compared to the limit of lengths of stair-shaped curves converging to it

2
Cantor Set and Fractals
11
Is the Cantor set a subset of rational numbers, and is it countable or uncountable?
6
We know the dimension of the Koch snowflake's perimeter, but does it have a measure?
5
Are there Cantor sets of non-zero measure?
1
Is this a Cantor Set? Nomenclature question.
4
Determine IFS of the von Koch Curve
3
What is the dimension of this fractal curve?
2
The Dimension of the Cantor Set: Clarification
1
Prove area of Koch snowflake by mathematical induction