are inverse functions of each other (specifically

The relations between integrals of circular and hyperbolic functions, and what an extraordinarily tight 'system' they all seem to form is a constant source of fascination to me - and the particular relation cited here is probably the strangest of all, to my mind.

It's probably too much to expect that a group-under-composition of functions could be formed out of them, or anything quite so neat ... but anyway:

The "weird theorem" (really just one theorem, of course) that is the nominal subject of this post: can it be proven directly from the properties of hyperbolic and circular functions and their relations amongst each other, rather than by the crude expedient of just evaluating the integrals and simply exhibiting them as mutual inverses?

I've just been brewing some thoughts, and I can't help thinking now that it might have something to do with the fact that

(I tend to use "y" in these kinds of integral, as when I was shown them the very first time it was by differentiating $y$ = circular or hyperbolic function of $x$ & expressing the result in terms of $y$; & I've just never gotten out of the habit.)

Let's see ... they are effectively compositions so

I think that's what they would be in differentiated form. Is there any lead in that?

they certainly look less formidable in that form.

a little, we get

Looks a bit like going round in circles. No, it's not quite that - it's more like tracing the threads allover the place & observing how wonderfully they join up end-to-end, no matter how crazy an excursion they make. well it does show that the functions in question are indeed inverses - but - we have still done it by solving the integrals ... really. Is this an improvement? I'm not sure. But I have certainly tried to incorporate the various advice that the contibutors have most graciously dispensed. And we've gotten another rather curioferous theorem into the bargain.

And it's also quite possible that I've missed the point or lost the plot somewhere along the line!

. In this particular case and considering $0\leq x\leq 1$, we have

and (using $y$, to emphasise that we are switching to viewlng the integration along the $y$ axis)

which is indeed one of the formulæ arrived at in the main body of the question.

Likewise for $x\geq 1$ we have

Which is the corresponding formula arrived at in the main body.

(l=left & b=right), that which is what it hinges on is that

So we could construct pairs of functions of the following form:

$$\frac{1}{x((x-1)^k.(1+x)^{n-k})^{1/n}} ,$$ where $n$ is a natural number, and $k$ is one of the Euler totient set of $n$; and the functions obtained by taking the primitives of these ought to have this reciprocal property we have been discussing of the integrals of their inverses being mutual inverses.

It actually works beautifully for the case n=1, even though that results in integrals that have infinities; and it's clear that it works for n=2, as that is the case that prompted this post in the first place. As for higher values of n ... anything > 2 results in thoroughly diabolickal hypergeometric functions that have who-knows-what inverses, and I shall have to feed them into some kind of mathematics package to test them for this property. It's actually not so bad though for mutual inverses (a bit like it's not so bad testing whether two numbers are coprime): you don't have to actually compute the inverses - you can just feed one into the other as an argument & see whether the identity function drops out.

The former is from

This isn't as much of a generalisation as I was hoping for; but it does at least exhibit the original pair of functions being queried as being part of some kind of pattern, and not just an isolated special case that just happens to have that property because it does!

The functions gotten in $n=1$ régime are worthy of some comment, I think, on various grounds. For one thing, it will be observed that in this case $\operatorname{f_l} \& \operatorname{f_r}$ are not actually different atall! However ... the integrals are different functions. And also we get infinities in this case, but fortunately it doesn't foil the reasoning. If we look at the whole matter graphically, we see that in our familiar $n=2$ case, the two integrals $\operatorname{g_l} \& \operatorname{g_r}$ spring from the point (1,0) square-root-wise; whereas the functions under $n=1$ proceed asymptotically from (1, -∞); and for $n>1$ they will proceed from the point (1,0) with behaviour tending to linearity - ^1-1/n, to be more precise - so the vertical & then curving down section will get progressively tighter with increasing $n$. This brings to the next point: the functions for $n=1$ positively abound in negativity; normally I would want to translate the whole affair into a region better-populated by positive numbers ... but I think in this case they are better left as they are, as they better-exhibit that continuity & progression of behaviour just described. It applies also to the functions that constitute the final result: like any bona-fide self-respecting mutual inverses they ought to be mutual refections in the line $x=y$; in the $n=2$ case they spring from the origin & 'splay-out' to become asypmtotic one to the line $x=\pi/2$ the other to the line $y=\pi/2$, whereas in $n=1$ case they approach asymptotically from (-∞, -∞) along the negative branch of the identity-function graph, and splay-out to become asymptotic, one to the $x$-axis, the other to the $y$, on the negative faces of them: this might incur that most of the affair is in terms of negative numbers ... but it the better shows that continuity of evolution of behaviour with increasing $n$.

Images for Case $n=2$ (the original subject of the post) 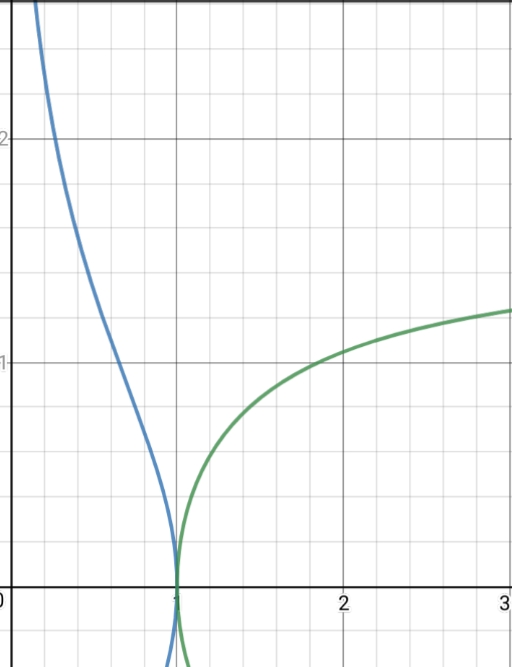 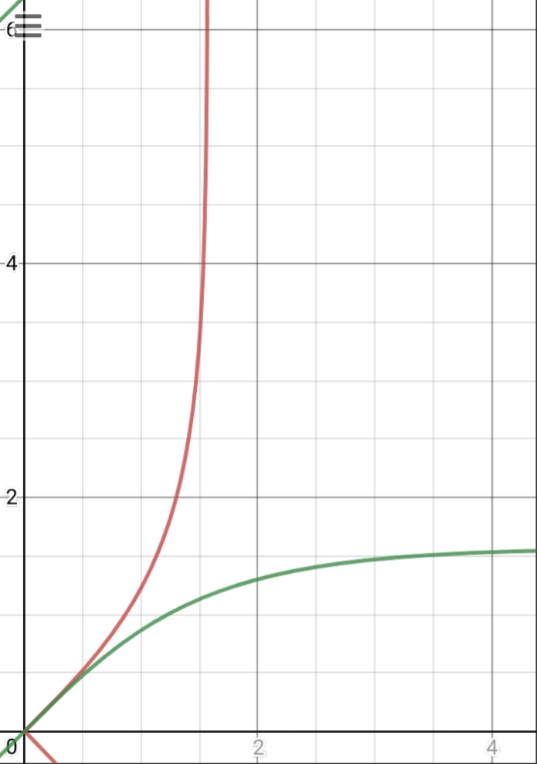 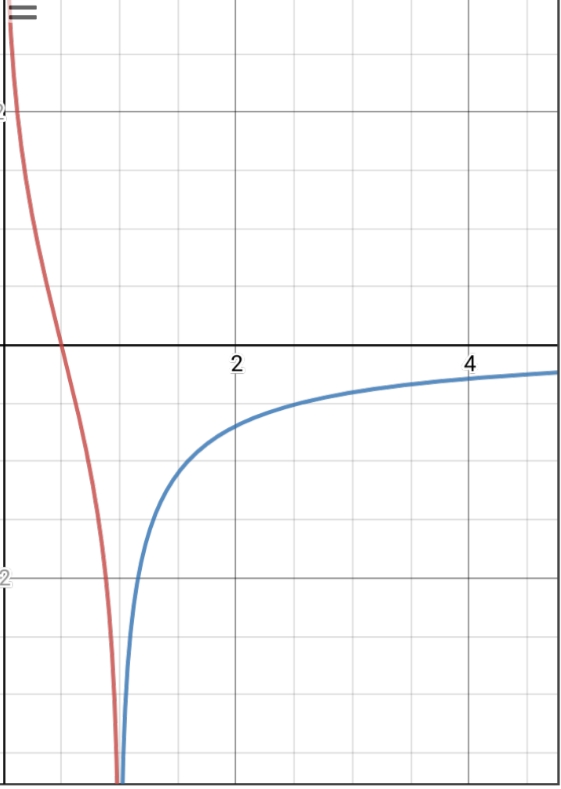 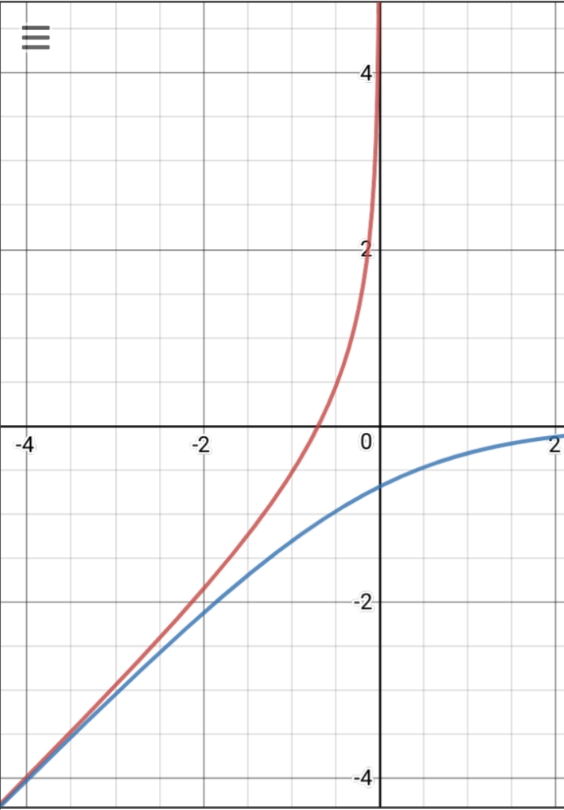 Not the answer you're looking for? Browse other questions tagged hyperbolic-functions trigonometric-integrals or ask your own question.