I have a really underpowered platform here and want to draw a Julia (and possibly Mandelbrot and Burning ship) fractals using a 8.24 fixed point class. I use iteration count for coloring and need to speed up rendering considerably. I read about perturbation theory (see this) and am trying to do the following:

This should make the 3 pixels "I cheat on" much cheaper to calculate (if this works I'd use 4x4 pixel chunks). Question is: Should this work in theory? It is not really working for me and I'm trying to find out what I'm doing wrong. "Regular" per-pixel Julia rendering is working ok for 16.16 and 8.24 fixed-point formats, so I suspect it's not calculation errors piling up... I can post C++ code if that helps. 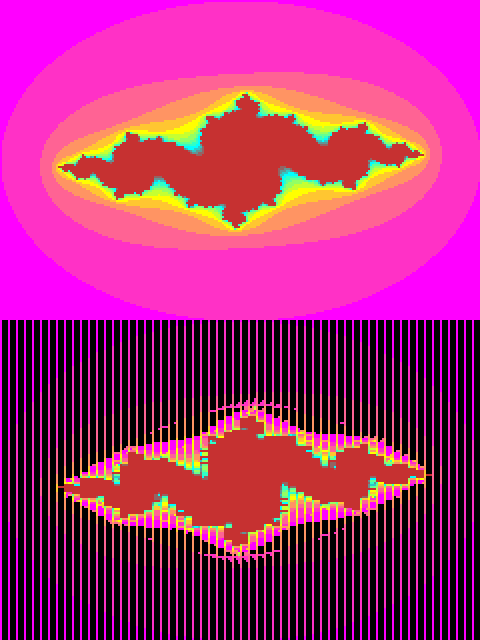 Your first bullet point is fine, that's generally how it is done.

Your second bullet point is mostly ok, for Mandelbrot type iterations you have per pixel $\delta = c_\text{pixel} - c_\text{ref}$, for Julia sets I suppose you replace $c$ with $z_0$. Re-deriving the update formulae for $A_n,B_n,C_n$ because they will be different to the Mandelbrot case:

Your third bullet point is very problematic - the series is only approximate, and beyond a certain iteration count (dependent on location) it goes wild and all bets are off. You can use probe points on the boundary of the image (iterated in another way, and compared with the approximation) to detect when the series is starting to diverge from reality. This will typically be significantly before the pixel escapes to infinity.

One possible solution is to rescale all your numbers, so instead of multiplying big $C_n$ with small $\delta^3$ you take out a constant factor $K$ to make $\epsilon = K \delta$ have magnitude approximately equal to $1$. It becomes:

I suggest instrumenting your program to tell you loudly when overflow occurs, underflow is harder to deal with I suppose.

Not the answer you're looking for? Browse other questions tagged fractals perturbation-theory complex-dynamics or ask your own question.